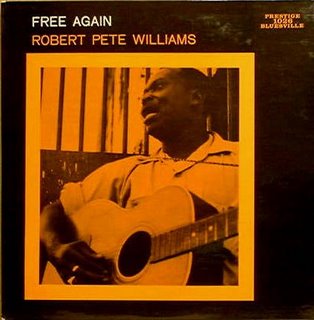 Sometimes it's not easy to listen to the blues. To do so properly, you have to put yourself as well as you can into the place of the singer and the tale sung. Since the "discovery" of Robert Johnson, Lightnin' Hopkins, Muddy Waters, and others by heavy rock royalty in the 1960s, this placement has always seemed a hokey luxury. Like white boys dressing as Bronx rappers, this was the 60s version: white boys from London trying to play the blues. The blues have always seemed so directly tied to a particular part of American culture that anything outside of that culture seemed to have, a priori, no essence to it, no soul, if these are defined authoritatively through particular kinds of experiences. Now and then, someone would hit the right notes, and that was about it.

Listening to the blues is a somewhat different story. There's a high mockability factor to the suburban yuppie "feeling" blues songs about trashed love, prison, violence, racism, drugs. Besides, if you're depressive already, you might not want to spend too much time ensconced in the blues. Putting oneself in the place of blues, if possible at all, risks being stupid and shameful, but the positive side of the gamble is intensified worldly experience.

Sometimes, in general, you listen to music and feel embarrassed. It's a kind of embarrassment that the musician hasn't hit it, whatever it is, and that you're there to witness the failing at it. This experience is made much worse by earnestness and certainty. I've heard plenty of live music like this - where I felt like bolting out of discomfort with the aural carnage. But you also know that moment when you've really heard it because it hits you hard in the ears, mind, and body.

It has happened to me regarding the blues on a few rare occasions and in different ways: at a little ramshackle wooden house in central Texas listening to the fun, showboat swamp blues of Clarence Gatemouth Brown, windows thrown open on a hot Texas night, and Wes' grin about to make him "fly away," as Gatemouth said; at a club in Chicago listening to the raunchy blues of Buddy Guy and Junior Wells and finding myself with a friend's brother backstage taking swigs off a bottle of Junior's whiskey; in an incongruous college basement in Pennsylvania drawn fully into the sublimely tripping Mississippi drone of R.L. Burnside out of which I only awoke a couple of hours later. And, of course, a handful of records: Billie's painful blues, Lightnin' Hopkins, Blind Lemon Jefferson.

Perhaps my favorite, though, and the one who sets me into the blues trance is Delta man Robert Pete Williams. I have only one record by him and can't remember how I came into it. It might not even be his best - his prison "field-recording" songs from 1959-1960 are generally viewed as his most important (and rare) recordings. (He was in prison for murder). But the record I have is damn good: Robert Pete Williams' 1961 Free Again. This is a deathly uncertain and eccentric voice from prison, a guitar that teeters at the edge of rambling amateurishness before it recovers a seeming mistake and turns it into improvisational world-creating brilliance, and a screen porch door that creaks occasionally in the background (headphones show you the latter - it's nice, keeps you grounded). The sounds are sometimes Malian instrumentals, sometimes country hollers, sometimes death chants, sometimes seductions, sometimes world-weary humor. This record does it endlessly. These are not simple blues songs. They are but they aren't, if you know what I mean. You need to listen.

I once heard the expatriate saxophonist, Steve Potts (who used to play with Steve Lacy), with his drummer and bass player in a tiny Parisian bar. There were about fifteen people around tables all talking, none paying attention except for me sitting alone at the bar. Potts assessed the scene and began to play with the crowd. The tinkling bell on the wintery front door tweedled through the sax. The phone ring at the bar became improvised jangling high notes. Glasses clinked and the cymbals followed Potts' lead. Conversations, laughs became hilarious Keystone Kops members of the "monkey chased the weasel." French words rolled seductively out of the sax. A loud German at the bar became low saxophonic grunts. The entire scene became the music, but to an oblivious audience. Steve Potts even clapped for his own songs. And I felt an intimate privilege at being the sole witness to the small and transient world-creating performance.

Robert Pete Williams improvises like this, but it's created not from sounds in the environment but from a jangling and rough environment of a unique mind that could easily surrender to fatalism. A man and a guitar creating a world of their own. Listen to it.

Other blues musicians created wonderful bodies of work; Robert Pete Williams created a whole musical world. The more one listens to his music, the more deeply one is drawn into his unique vision. The dark, fluid voice and directly powerful lyrical imagery build with studied intensity. The guitar accompaniments, which often stay within one chord through a whole song, are like nothing else in blues... His songs were usually improvised, unrhymed and in no particular metric pattern, and his guitar tended to function as a rough second voice.

Although Robert Pete Williams died in 1980 at the age of 66, he arguably remains the most avant-garde blues performer ever recorded. No punk rock band has ever matched the jagged, acerbic fury of the riffs Williams played 35 years ago. No rapper has approached his ability to evoke the torment of life in prison or bend language to cast an eerie spell over a chance encounter with a seductive woman. Williams could improvise precise, topical blues numbers with remarkable spontaneity...

The first shock is the peculiar form of these blues. Williams repeats the first line at the beginning of each verse but boldly disregards the rest of routine blues structure...

Williams changed his style somewhat after the prison recordings and Free Again. I suppose that after his parole he started to hear, like Steve Potts, the rest of the world, even if few people have ever really listened to him.

In 1965, he gave a widely quoted explanation, saying that "the sound of the atmosphere" changed his playing. "It could be from the airplanes or the moaning of automobiles," he said, but anyway, the wind blew a different music to him that transformed his blues.

Thanks for the great review, I used to collect but have gotten lazy. I used to be hooked on Otis Spann, Willie Horton and the chicago deal but it's been to long.

I'm with you on Otis Spann, Troutsky. I've never been much of a Chicago blues guy, though. Give me Mississippi or Texas blues....

Oh, my god- the Potts in th' Parisian bar thing is beautiful. Would that I could spend days at his feet. Nicely written.

i'm listening to free again and what can i say, amazing. My favourite blues album and bluesman ever. Thank you for the post.