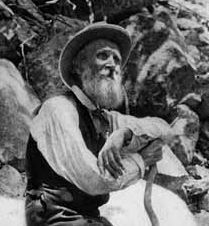 One of the landmarks of the American environmental battle - once having pitted John Muir's (and the nascent Sierra Club's) sense of the intrinsic value of nature against Gifford Pinchot's utilitarianism - is Hetch Hetchy Valley, near Yosemite. Muir described Hetch Hetchy as more beautiful than Yosemite. Yet, to provide a water source for the city of San Francisco, the Tuolumne River was dammed in the 1920s and Hetch Hetchy Valley filled with water.

But over the past twenty years there has been discussion of draining the reservoir and restoring the valley. This project appears to be finally seeing the light of day in a convergence of political will and environmental cause. The price tag is high, however: estimates range from $1 billion to $10 billion.

...The scientific winds are pretty much already there. The valley has lain under 90 metres (nearly 300ft) of water for eight decades and the first task will be to knock down the huge dam that flooded Hetch Hetchy in the first place. Then the landscape underneath will have to be restored to its wilderness state, allowing animals and plants to flourish. Some scientists favour a phased restoration, draining the reservoir bit by bit and experimenting to see which methods work best to keep out non-native plants...

Scientists hope to learn much about how to restore a landscape from what is likely to be little more than a moonscape of mud when first revealed. That knowledge will boost reclamation projects around the world...

...The soil will probably have changed after being soaked in water and covered in sediment. The rare lichens that covered the cliff walls will have died. There will be a 'dirty ring' around the whole valley similar to a tide mark or, more prosaically, a ring of dirt around a bath tub. The biggest task would be knocking down the dam...

If the Hetch Hetchy project does succeed, California would end up with a second version of Yosemite, the famous national park that attracts three million visitors a year. It will be a natural wonder and a paradise for hikers and climbers. The valley was once full of savanna and oak and pine forests, with waterfalls and huge cliffs in dramatic colours. It was also home to the Paiute and Miwuk Native American tribes, and its name is derived from their word for a type of edible grass that used to grow there.

I am a Yosemite-Mono Lake Paiute. My ancestors used to live in the Hetch Hetchy Valley before it was dammed up.

What do you think about the restoration?