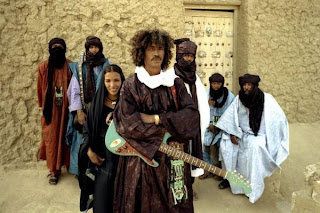 I don't know what else to call this category but "International." Since I've already compiled the French and Latin American lists, and since I'm in the US, "International" basically means "Music Not from the US, France, or Latin America, and of Which English Is Not the Principal Language." I'm not even sure this will hold up over the next couple of lists.

Is it the case that the Smithsonian Field Recording is a thing of the past? Are there still Alan Lomax types out there? It seems to me that the Smithsonian recordings are increasingly indistinguishable from many other "world music" recordings on sometimes fairly large labels. The sound is crisp and "produced." Twenty or thirty years ago a group such as Mali's Tinariwen likely wouldn't have had a label simply because the music industry was oblivious and because there was no market-constituting audience that possessed the aesthetic to take up this beautiful music. At best, maybe the Smithsonian or some other cultural research organization would have pressed their music to a very limited number of vinyl copies. Is it that today everyone can find a way to record, that recorded music is known and possessed almost everywhere? Or is it that the global music industry has sucked the planet dry of its roots? Or is it that we've come upon a synthesis of local music and what's available to a mass market? Or are we all out of fields?

I would love to know how you find the time for all this listening.In my world this is already a five year list! But thats ok.

I love that there is an international list! I would add Manu Chao for his album La Radiolina - the best!

I see someone already mentioned Manu Chao!!!His album "La Radiolina" is also my #1 of the year...