I’m scheduled to give a lecture on “The Science of Climate Change” to an adult-education class next month. My topic changed at the last minute because of circumstances beyond the control of those of us involved. I decided to take a chance and force myself to learn something.

I’ve followed the climate change debate loosely, starting a decade or more ago with some of the early modeling by colleagues. I was using similar computer models for another problem, and I started out skeptical because I knew the limitations of those models. But the models have improved mightily, and the evidence seems pretty firm that the climate is changing rapidly and the reason for it is all the carbon dioxide we’ve been pouring into the air for a couple of centuries now.

But, having started skeptical, and following my usual principle of preparing for questions my audience might ask, I’ve been looking at what the skeptics have to say as well as the IPCC website, RealClimate, and other explanations of the science.

I’ve said before that I think the science is not being explained well, and in working through the material along with a discussion with skeptics at an undisclosed interweb bulletin board, I think I see one of the stumbling blocks. It’s not clear to me whether the people who have seized on this are genuinely confused or are just trying to muddy the waters. I think there are probably some of both.

This particular stumbling block comes in several guises. The basic claim is that the explanation of carbon dioxide’s role as a greenhouse gas as given by the IPCC and others contravenes the second law of thermodynamics, or perhaps the first. The argument seems to be that there cannot be a layer of gas high in the sky that radiates energy back to earth because the temperature of that layer of gas would be lower than the earth’s surface temperature. I have not tried to catalogue all the variants. There are at least two levels to refuting this argument.

First, the scientists of the IPCC have learned their thermodynamics and will spot basic flaws. Those of us who have taken thermodynamics courses know how the sins of perpetual motion machines against thermodynamics can be subtly hidden. The sheer number of scientists looking at this material assures that such errors will not slip through.

The other level is a bit more fun. I didn’t realize how much the greenhouse metaphor had made its way into my own thinking until I started looking at these “second-law” arguments. It turns out I had two parallel lines of thought: a mental picture and the mechanisms of heat transfer and molecular dynamics.

The standard explanation of the greenhouse effect is that the glass in a greenhouse is transparent to visible light, which strikes the soil and other objects in the greenhouse and is converted to heat, or infrared radiation (I could say light here or radiation after visible, but I’m using the common idiom), to which the glass is opaque. So the light comes in, and the heat doesn’t get out. The glass is separate from the interior of the greenhouse, a shell over it. In the same way, it is said, carbon dioxide is transparent to visible light and absorbs infrared radiation, thus heating things up.

But it’s not quite “in the same way.” The carbon dioxide isn’t separate from the rest of the atmosphere, it’s thoroughly mixed in. Gases mix rapidly and completely. There isn’t a shell of greenhouse gas in physical analogy to that shell of glass on a greenhouse. Unfortunately (and this is where my mental picture got suckered in), most of the diagrams explaining the greenhouse effect look like this one from My Climate Change: 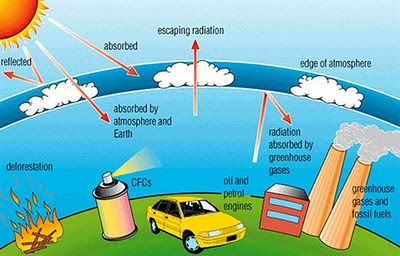 Problem with Plovers has an explicit layer of greenhouse gases! 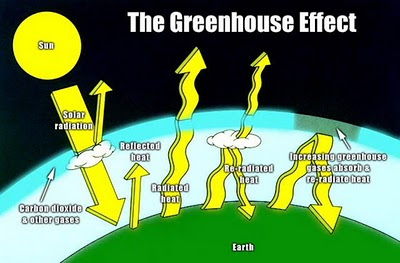 Even the Department of Energy does it. 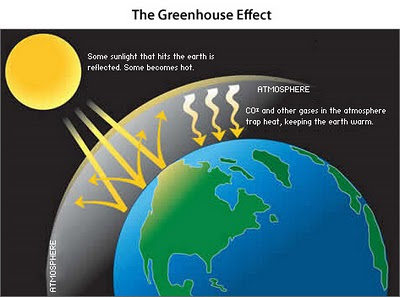 This one, from the University of Arizona, is a little better, but it’s still got a layer. In fairness, some of those layers represent the top of the atmosphere, but if you’re thinking about the glass in a greenhouse, those layers might seem to be the equivalent of that glass.

One of the things that has always puzzled me is the persistence issue. Different molecules persist in the atmosphere for longer and shorter times, depending on where they are in the air column, and the chemistry of their immediate environment. I've heard that one of the problems with CO2 specifically is that it can persist in the atmosphere for several hundreds of years, as opposed to methane, which leaves in a much shorter time.

So, is there a succinct way to summarize what the "second law" people have wrong? I was thinking it was that the said gases are not actually warming the the atmosphere, but rather preventing certain other forces from cooling it. I don't know if that's right though.

Interesting. Most of the skeptics I've read focus on the methodology for determining historic temperature as well as modeling adjustments made to 20th century temperature data.

There are a number of themes among climate skeptics. When I realized how misleading many of these diagrams are, I wanted to write about how they contribute to one species of skepticism.

This site has responses to a number of those themes. I don't find all of them convincing, however. I think they're correct, but they don't necessarily address the basis for the misconceptions.

Is there a succinct way to summarize what the second law people have wrong? I'm more comfortable trying to get a correct explanation into clear English. Some of the skeptics' arguments are so riddled with errors and misconceptions that it's hard to know where to start. I have one paper beloved of the skeptics that is full of mathematics and totally wrong in its basic concepts, the subject of this post being one of them. I thought of using that paper as an example, and maybe I'll do that in another post.

Let me give a partial answer to Peter's question and think about whether I need to say more.

Different molecules persist for different times in the atmosphere. This is because they participate in different kinds of physical and chemical processes. Chemistry and concentrations vary with altitude because the pressure and temperature change. The mathematics of this is very similar to that for half-lives of radioactive substances.

The lifetimes given are usually for the entire atmosphere. Reactive species, like free radicals, have longer lifetimes at higher altitudes because the pressure is lower, and there are fewer other molecules for them to react with.

Concentrations of atmospheric gases will change with altitude and around clouds and particulate matter. But let me do a bit more research before saying much more about this.

If I'm rightly recalling the gist of a problem in stat mech, the heavier gas molecules of the air column--like the heavier constituents of a spinning centrifuge tube--will be more concentrated at the bottom than the lighter ones in their company. So to the extent that this effect is significant, the mixing can't perfect in at least one sense: The ratio of the abundances of one gas, say O2,to another heavier one, say CO2, will vary with altitude. I believe that's the cause altitude sickness (cerebral edema) above about 3000 m in hikers and pilots, in which case the effect isn't insignificant in that sense, but physiology is a finely tuned thing. Anyway, I wonder if that stratification is part of what motivates explaining in terms of layers.

There are differences in composition with altitude, but I wouldn't call them stratification, because that implies too much separation, but there are gradients. I want to look into this a bit more and find out exactly how much separation there is.

Altitude sickness is caused by not enough oxygen; the carbon dioxide in the atmosphere isn't a factor. Where I live, at 7200 feet, we've only got about half the oxygen of what there is at sea level.

A couple of very general comments....

In terms of everyday skeptics -- the ones who think that "common sense" disproves this or that aspect of AGW -- I tend to be a bit fatalistic. I think the emotional payoff of not understanding is much larger than the payoff for becoming better informed. I don't think better metaphors and analogies will help, in those cases.

Which makes me wonder, sometimes, how much of the debate is actually necessary. Arguments by "scientific" skeptics tend to contain huge mistakes, but the people who are fooled by them don't care...they're just looking for something that sounds like science.

Meanwhile, amateur arguments are usually based on endlessly rotating misconceptions -- contradictory ones, often. Correct one, and another pops up instantly to take its place. Culturally, this stuff is allied to creationism and it's similarly difficult to argue against.

The point being that we may not be dealing with "stumbling blocks," so much as moats and fortifications.

Right now, a pretty small percentage of the population are skeptics on AGW, in the sense that they believe warming is either not happening, or natural. It'd be interesting to know what percentage of these people are actually open to learning new things, or to understanding better descriptions. Not enough to materially affect the outcome of the political debate, I suspect. And sometimes I feel as though they're scapegoats for a more general apathy and lack of political willpower among people who do know better.

Maybe the time we spend arguing with people who can't or don't want to understand would be better spent motivating and encouraging people who either do understand, or are willing to trust the scientific consensus. Maybe that's exactly what skeptics are trying to prevent us from doing.

All that said, I argue with these people often, online and off, so as usual I'm not very good at taking my own advice.

A brief Web surfing tells me altitude sickness happens for reasons not yet fleshed out. Somebody in Nepal told me it was the CO2 to O2 ratio, based on the rationale that high blood concentrations of CO2 exert a stronger regulatory stimulus on the respiratory system than do low O2 concentrations--which I think is why Diamox/Acetazolamide is supposed to work as a preventative, not that this should be taken to the bank while nobody claims to understand the sickness itself.