The War Against Women – Continued

“But we fought all those battles in the sixties,” one of my friends said. I guess this is what is meant by “A woman’s work is never done.”

A few days after the fact, we have a woman lamenting the permanent damage that has been done to poorpoorpoor Nir Rosen’s journalism career and how sad it is that just a few little tweets (even if they did reflect what he really thought, which seems to be the case) could do that to a person. But he’s such a good reporter!

He’ll get another reporting job, perhaps one of the ones they’re going to take away from women journalists to protect them. Oh yes, he said some bad things, but it was only once, and he didn’t think anyone but his friends would hear, and he’s such a good reporter! Such things never damage men permanently.

Yesterday, when I began writing this post, it looked like there had been more Internet words of sorrow for poorpoorpoor Nir Rosen and his career than there were wishing healing for Lara Logan. But today that is changing. Ta-Nehisi Coates points out that Logan did a brave and necessary thing in allowing the assault on her to be made public. Now Kim Barker and Sabrina Tavernise come forward to share their experiences.

Women are still being taught to hate themselves and other women. A lot of happy talk surrounds that hate: How brilliantly ironic, able to mock the conventions, making their own choices about femininity. But it’s the parodies of femaleness that are elevated. It’s as if the guys who leave their shirts open to display gold chains entangled in chest hair were set up as paragons of male style. Oooooh, some have much more hair than others! That one’s got no abs at all; too bad, he’s got a cute face. Sorry guys, those gold chains really draw attention to all that! How about waxing little designs into that? Your girlfriend’s initials?

Oh yeah, let’s see more codpieces! And middle-aged men really ought to realize that nobody wants to see their baggy necks. They can’t even shave them properly. A little plastic surgery would fix that right up. Hahahahahaha! No, we’re not laughing at you, just appreciating your witty postmodern irony. Or Bad Things Happen To Everyone On The Internets, as MoDo might say.

A parody must have a base reality to play against. Jon Stewart and The Onion are funny because we have real news, or something approximating it. What is the reality that these long-eyelashed, surgically sculpted parodies play against? Where do we see real women in the media? 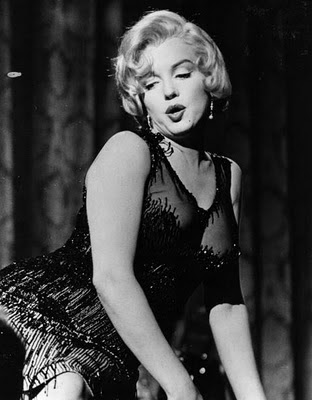 The messages about beauty have little to do with real women, whereas men are found to be attractive, wrinkles, spare tires, and all. The standards that women are held to are damaging. Slender enough to be tiny and weak. Marilyn Monroe is fat by today’s standards. Look at those arms! Surgery always has its dangers. Not to mention the expense and trouble of dealing with makeup and uncomfortable clothing.

What’s behind the obsession with women's looks? I don’t think that anyone has really figured this out. It could be a desire to please men, or to compete with other women (for what? not at all clear it’s for men) or the influence of advertising, the purpose of which is to induce women to spend more money.

What do men want?

Much of the sexual harassment of women is men using women to display their status to other men. Eye candy on the arm. I copped a feel and you didn’t, or mine was better than yours. I am so masculine that women must cover themselves from head to toe to be safe. Or just because they can.

Maybe it’s time to say goodbye to all that. Women exist independently of male fantasies and status needs. Women’s bodies are what they are. Yes, we can make ourselves more or less attractive by the way we wear our clothes and the way we keep our skin and bodies healthy, but how much more is needed? And for what?

And it’s time to insist that men display some respect for women, whether it’s on Twitter or in the streets. Humans can choose how they behave. Golly, we said that in the sixties, too!