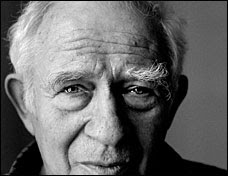 It can't be any better said than this by Wolcott:

For those of us who grew up in his literary thrall, losing him is like losing a planet, a fire sign of the Zodiac. But the initial sadness upon seeing the news of Norman Mailer's death--his headshot flashed on cable news, followed by a few stingy words of explanation segueing into an update about a homicide case; in such high regard is American literature held by our media--gave way to a renewed gratitude and admiration for all that Mailer accomplished and the forward-ho ferocity of his life-force that fed and fueled everything he did. He had a great life, a multi-storied career, a molecular-altering impact on postwar culture, and he never tamped down his iconoclasm and risk appetite for a cozy fade into the sunset as a senior statesman of letters. "The fact that Mailer continued writing up until the very end says more about him as a creative being than anything that any critic could offer," observes reviewer and blogger Laura Axelrod. Infirm as he was, "Mailer was clearly as curious and alive as he was in the 60s." As a writer and man, he went down fighting to the end, courting turbulence, willing to look foolish and willing to wage big, his body ravaged but his mind still keen and serrated. Mailer believed in karma, and may his transmigration be the voyage he was seeking.