I know, I know, not much posting lately. I've been traveling. Here's a photo of an elephant seal near Cambria, California, to prove it. 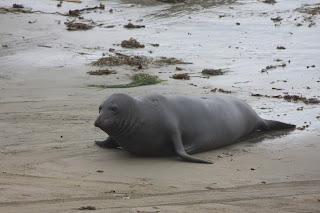 I've known a few charming men in my life, but not a lot. Maybe two, in fact. This article considers what charm consists of in men and why men don't want to be charming. The world would be better if they were. And I'm thinking now that some men I know (the word "guys" doesn't fit there) indulge in some elements of charm, sometimes.

Conor Friedersdorf just says it right out: Establishing a no-fly zone in Syria would be an act of war. That phrase rolls so easily off the lips, no need to think about what is needed. If you're in the mood for thinking, though, consider that the no-fly zone was established in Iraq after a major war had destroyed Iraq's military. That's what it takes.

An Act of Congress has made it impossible to sell helium from the US's plentiful reserves once the cost of stockpiling helium is paid off. The act was part of the mid-nineties privatization. I'm wondering if this was just a dumb mistake or if it was another Republican sabotage. The latter doesn't make much sense, but that probably wouldn't be required.
Posted by Cheryl Rofer at 5:22 PM 2 comments:

That's the title of another op-ed from me and Aaron Stein at the Globe and Mail.
Posted by Cheryl Rofer at 10:41 PM No comments: