On Macho In Foreign Relations

This will be a very quick post; I hope to flesh out these ideas in more detail later.

I see a lot of strutting and puffing that President Obama has "lost" to President Putin. That perhaps makes sense to those who are fully preoccupied with winning and losing in their own lives, but it makes much less sense in diplomacy.

An ideal diplomatic solution serves the needs of all parties. That's usually not possible, and yes, nations jockey to get the best for themselves. But "winning" and "losing", short of unconditional surrender, are a great oversimplification that blinds those obsessed with it to large areas of strategy.

I also see that the strutting and puffing is coming from men. I can't think of a single woman I would put in this category - possibly Susan Rice and Samantha Power, judging from their tweet streams before the Lavrov-Kerry framework came out, but they have been silent on the subject since.

The age of that kind of diplomacy is over, guys. President Obama said it well this morning in his interview with George Stephanopolous: he wants to get the substance of policy right, not the style. So he is not strutting and puffing. Let Vladimir Putin do that.

George Bush put on that facade, and it got us Iraq. President Obama has learned from that, and he's been responding to opportunity, as a good strategist should. We don't know how this will turn out; Russia and Syria may not be playing in good faith.

It's white guys who want the strutting and puffing. My experience is that women often have to take what others may see as humiliation and make the best of it. Fortunately, I had mentors who showed me how to turn that into a strength. I suspect that Barack Obama has experienced that sort of thing and is using his experience. I think he's doing the right thing.

And oh yes, strutters and puffers: exactly how would you have handled the past few weeks and not gone to war? Or do you think another war would be a good thing?
Posted by Cheryl Rofer at 3:11 PM No comments:

A Strike Against Syria? 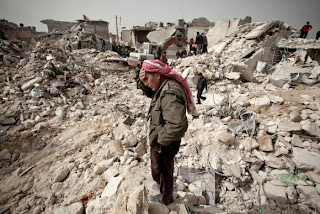 President Obama says he believes there should be a strike on the Syrian regime’s military assets in retaliation for the regime’s use of chemical weapons against civilians in Ghouta. He has asked Congress to vote on it.

In internal US considerations, the Congressional vote is the big news. Presidents have not always felt they needed the approval of Congress for military operations. Congress is constitutionally charged with the power to make war, but Bill Clinton felt that a one-off cruise missile strike against a suspected al-Qaeda target in Sudan didn’t rise to the level of war. Nor did Jimmy Carter ask Congress to approve an incursion into Iran to rescue the hostages from the US embassy in 1980.

More egregiously, Lyndon Johnson cited an incident in the Gulf of Tonkin to immediately raise troop levels in Vietnam and then to get a resolution limiting Congress’s power to intervene in war plans. After the 9/11 attack on the United States, George W. Bush got an authorization for the use of military force from Congress to invade Iraq on the pretext of weapons of mass destruction, nuclear weapons in particular. Both the Gulf of Tonkin incident and Iraqi nuclear weapons later turned out to be lies.

President Obama inherited the wars in Iraq and Afghanistan with the intent of winding them down, and he has been doing that. However, at the same time, he has been ramping up the use of drones to target people believed to be associated with terrorist organizations. That use has raised questions about the executive branch of government’s role in war. The American people are tired of wars and wary of excessive executive privilege.

So it makes sense that Obama, a constitutional law scholar, would have second thoughts about his advisors’ urgent program of a quick strike on Syria to enforce international law against the use of chemical weapons. The vote in the UK Parliament against participating in a strike undoubtedly also played a part. We shall now see whether Congress is capable of meeting the challenge.

The reasons Secretary of State John Kerry gave for a potential attack are maintaining the norms and treaties against chemical weapons use both in Syria and in other nations that may be looking on, the security of our allies in the area (Israel, Jordan, Turkey, Lebanon), the security of the United States, and some words that may be alternatives to the shorthand “US credibility.”

The first three are real concerns: it is important to maintain treaties and norms, and the security of nations is indeed threatened both by Syria’s chemical weapons and by the civil war there. The credibility argument is often advanced as a reason for military action, hardly ever for diplomacy.

Norms and Dangers
Although those arguments are real, they raise many questions. Amateur and professional lawyers are hard at work distilling points from the 1925 Geneva Protocol (“Protocol for the Prohibition of the Use in War of Asphyxiating, Poisonous or Other Gases, and of Bacteriological Methods of Warfare”) and the Chemical Weapons Convention.  Syria is a signatory to the first, not to the second. A great deal of water has gone under the bridge since 1925. It is not clear that either prohibits the use of chemical weapons within a country. And enforcement would be through the United Nations, not by a single country or group of countries that decide on their own. That’s my simple non-lawyer summary. Arguments are in progress on each of those points.

The presence of chemical weapons in a country racked by civil war is indeed dangerous to the surrounding countries. Some of the many factions fighting the Syrian government are also opposed to governments in surrounding countries, Europe, and the US. If they obtain chemical weapons, they may use them elsewhere. The war itself is likely to increase the numbers of jihadis who may learn skills that will help them to strike elsewhere, but this is not the primary focus of the US argument.

Responsibility to Protect
Underlying these arguments for some of Obama’s advisors is the responsibility to protect (R2P), a United Nations initiative in response to genocidal atrocities in the Balkans, Rwanda, and elsewhere. It is not formalized in treaties. Susan Rice, Obama’s National Security Advisor; Samantha Power, US Ambassador to the UN, and Anne-Marie Slaughter, former Director of Policy Planning at the State Department, are all strong advocates of R2P. The first two directly advise Obama.

R2P says that states may intervene in another state if that state is mistreating or looks like it may mistreat its people. This seems like a good idea, but the implementation is daunting. The Treaty of Westphalia in 1648 was in response to states intervening in other states on behalf of co-religionists. It ended a long string of wars in Europe. We are now living in a world in which Westphalian sovereignty is the norm, so it is easy to ignore its benefits. The criteria for intervention must be drawn very clearly and narrowly, and that has not yet been done. Additionally, it must require UN approval. R2P as it currently exists would rely on the subjective judgment of states or a lengthy discussion within the UN. Consider the possibility of Russia bringing up human rights violations against minority voters in the US. Charli Carpenter works through the issues.

The two advisors who favor R2P have been very vocal in supporting an attack on Syria. Anne-Marie Slaughter has been more restrained recently on the subject.

Balancing the Concerns
For both the arguments of chemical weapons norms and R2P, I believe the proponents have not been realistic in their balancing of civilian deaths against their greater goals. As we read the news, our focus constantly shifts: photos of injured civilians give way to discussions of maintaining international treaties. The first is more freighted with emotion, but deaths and injuries will be real, and limiting civilian deaths is one of those abstract/not-abstract goods that international norms and treaties address. We need to look at the whole picture.

Attacks, no matter how closely targeted, will result in civilian deaths. Assad is reported to be moving his equipment closer to civilian areas and prisoners to military sites. Some missiles may be poorly targeted or go off course. Does the good of rebuking Assad for his use of chemical weapons balance those deaths? I don’t know the answer to that. My sense is that a limited cruise-missile attack, targeted as tightly as possible, may be justified. Whether it is wise is another question.

Shall We Consider Diplomacy?
As Obama said on August 31, the attack is not time-limited. It would be wise to open up as much diplomacy as possible while Congress is making its way back into session. Iran, in particular, has shown some interesting possibilities recently.

The new Iranian president, Hassan Rouhani (@HassanRouhani) has been tweeting his disapproval of the use of chemical weapons in Syria, although he has not indicate which side he believes used them. Former Iranian President Hashemi Rafsanjani may have blamed the regime, although that statement has now been removed. Reuters seems to think it was real, and an audio recording apparently has him saying it – this story is developing as I write. The Supreme Leader continues with tweets warning against foreign intervention.

Iran is Syria’s patron. But Iranians also carry the memory of Saddam Hussein’s use of nerve agents against them in the 1980s. They have proposed a peace conference for Syria, and Rouhani seems open to working with the US. A week or so ago, Undersecretary-General for Political Affairs Jeffrey Feltman spent two days in Iran, talking with high officials including the foreign minister. Feltman was previously in the US State Department and would be an excellent conduit for messages from the US government.

Trying to split the Iranian government on this issue would be a bad idea, but there may be ways in which Iran and the US could work together to move the factions in Syria toward an accommodation.
Reaching out to Russia might also be a good idea, although relations are very stressed. In any case, such diplomacy would be very quiet at this point, so we wouldn’t be hearing about it. The G20 meeting comes later this week, which will provide opportunities for talks. They won’t be between the leaders; the most productive talks will be at lower levels. Both Obama and Rouhani will address the United Nations General Assembly a week or so later.

Aid to the refugees and the countries receiving them would also be a positive step.

Finally, we come to the “confidence in America” argument. I hope to write more about this later. I think that this argument is losing its effectiveness with the American people, and some of our allies (UK, for one) don’t give it a lot of credence. Perhaps Assad does. It’s a slippery argument, with a lot of the speaker’s subjectivity thrown in. When Israel says that US credibility will be damaged if it doesn’t attack Syria now, we may take that as self-interested. On the other hand, Assad’s future actions may depend on how dangerous to his cause he perceives the US to be.

Syria constitutes a terrible decision for both Obama and Congress. It’s a dangerous situation for the region and beyond as well as a humanitarian catastrophe. Whether outside forces can do much to change that is doubtful.

As events have been developing, I have been collecting some of the better links here. Many are still worth reading.

Posted by Cheryl Rofer at 1:03 PM No comments: