A profile of the new president of Indonesia, Joko "Jokowi" Widodo. Looks like this is good news if his oppnent will let his challenge die.

Russia is going to do its own version of Eurovision. No gays or cross-dressers allowed.


“The first Intervision was about challenging the West and this Intervision is about reaffirming Russia as a force to be reckoned with,” says Dean Vuletic, a historian at the University of Vienna. “It’s no coincidence that it will be held in Sochi, which Putin used to showcase modern Russia during its Winter Olympics.”

I have been focused on Russia and Ukraine, but what is going on in Israel and Gaza is saddening and appalling. Israel imprisons Palestinians in Gaza and then bombs them. I'm sorry; I can't accept that.

In 2005, Tony Judt wrote "The Country That Wouldn't Grow Up," which is as relevant today as it was then. It seems to me that the part about young people having less connection to the Holocaust and its slipping into history has relevance beyond Israel and the Holocaust. David Kaiser writes about a similar issue, that those young people, with the aid of their elders, are developing their own facts about the world. In the US, that's partly the result of thirty years of conservatism's emphasis on the market-idealized individual, whose desires must be paramount. It's often occurred to me that the holders of that view also decry the death of family and community. Which I don't think are dead, but minority views today.

I've been wanting to write a post about some of those issues, and perhaps a number of things are coming together so I can. I admire Kaiser's try. My approach will be different from his.

More on Israel and Gaza in a similar vein.

How to talk about uncertainties. In other contexts, they might be called nuances. We really do need to get better about talking about them in many dimensions.
Posted by Cheryl Rofer at 1:02 PM No comments:

Science magazine used a very objectifying, offensive photo of transgender sex workers for the cover of its 11 July issue, and then one of its editors made it worse by his tweets. The cover is shown here; I'm not going to spread it around. Glendon Mellow (@FlyingTrilobite) tweeted out a mini-seminar on the art it reminded him of. Definitely worth reading.

A strange hole has been observed in the Siberian permafrost. It's not clear how long it's been there or what caused it. Scientists are investigating, but no salacious photos have yet emerged. My first thought was that Vladimir Putin's demons are escaping. Something like Pandora's Box.

And another bizarre Putin connection. Brian Fischer, a Christian radio host, says that Barack Obama commented on the death of AIDS researcher Dr. Joep M. Lange in order to normalize men having sex with men. Here's part of Obama's tribute:

Putin sees himself as a defender of a Christian civilization that would refuse to normalize homosexuality. Maybe he and Fischer could get along.

A good FAQ about the Malaysian Airlines flight that was shot down over Ukraine.

James Garner has died. I enjoyed his tv shows, perhaps because, as this obituary observes, his characters handled difficult situations with strategy rather than violence.


Posted by Cheryl Rofer at 7:46 PM No comments:

I should have posted it here too, but I didn't, so go read about how "Dr. Strangelove" explains that security studies are inherently gendered over at Nuclear Diner. Ingrid Rowlands tries to wake up the lit-crit crew on the issue of gender, too.

We always need more fairytales, and now there are 500 more!

A consideration of how historical anniversaries can shape our view of current events.

Russian Propaganda – How They Do It 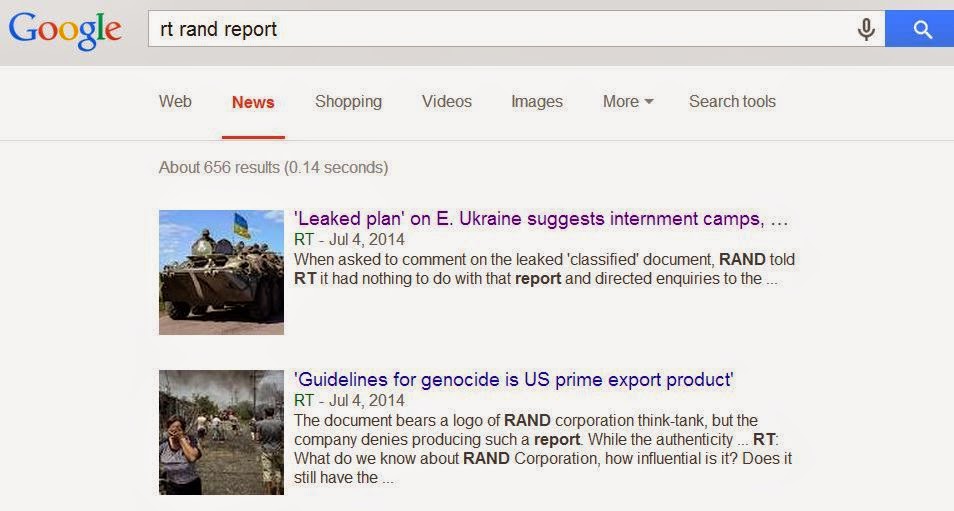 RT (formerly Russia Today) is funded by the Russian government. They produce a wide variety of material, from apparently straight news through the discovery of sea monsters. The New York Daily News through what you see at supermarket checkout stands, more or less.
Last week they published a story supposedly on a report from the Rand Corporation for the US government on plans for Ukraine: internment camps and executions. Several people on Twitter noted an obvious forgery in the logo. The story took off on Twitter anyway, thanks to the Kremlin’s army of trolls and those who are frightened about events in Ukraine.
Read more »
Posted by Cheryl Rofer at 11:06 AM No comments: