History says, Don’t hope
On this side of the grave.
But then, once in a lifetime
The longed-for tidal wave
Of justice can rise up,
And hope and history rhyme.

A very good obituary at the New York Times.
Posted by Cheryl Rofer at 11:23 AM No comments:

On Bombing To Bring About Peace

I've posted it before, but it seems relevant now. 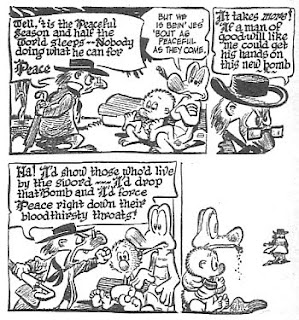 Posted by Cheryl Rofer at 9:12 AM No comments:

The Hacktivist as Self-Actualizing Citizen

One of the things Edward Snowden said in the first video interview the Guardian published was that he wanted the discussion to be about the NSA materials he intended to release, not about him.

But of course that’s not possible. In order to have an intelligent discussion about the NSA, we need to know how materials fit into the larger scheme of what the NSA is doing and how Snowden selected them. Since he chose Bart Gellman, Glenn Greenwald and Laura Poitras as his media contacts, we also need to know how they and others at the newspapers involved choose from Snowden’s material and why they present it as they do. It might also be useful to know what Wikileaks has to gain from their involvement.

The magician says, “Watch my right hand closely,” so that we won’t see what he’s doing with his left. The material that is left out may be as important as what is revealed.

Edward Snowden is thirty years old, a self-taught hacker who has worked for the US intelligence services, sometimes through contractors. His adult life (let’s say from the age of eighteen) has seen two presidents, Bush II and Obama, with memories of Clinton and possibly Bush I. He would have learned about the Cold War through reading. The economy has been pretty good most of his adult life, until 2008, but his jobs in the intelligence services seem to have smoothed that out for him.

Like many other young men involved with computers, Snowden professes some degree of libertarianism. It may be inferred from his hacking of the NSA and sharing the documents that he shares some of the thinking of the hacktivist movement. He hasn’t said much and is saying a great deal less since he’s left the Sheremetyevo transit zone, so we don’t know what he believes. Ethan Zuckerman has written quite a bit about how young men like Snowden are interacting with the political world.*

We can start here:

Hackers engage in instrumental activism, seeking change by challenging unjust laws. They engage in voice-based activism, articulating their frustration and dissent from systems they either cannot or are not willing to exit…In addition to traditional channels for civic engagement, they can engage by creating code, giving them a more varied repertoire of civic techniques than non-coders have.

How do they know when laws are unjust? And how do they propose to use that code?

Zuckerman quickly trashes the idea of voting by informed citizens, with the help of Michael Schudson.

We may be experiencing a shift in citizenship where the idea of the informed citizen no longer applies well to the contemporary political climate. The entrenched gridlock of Congress, the power of incumbency and the geographic polarization of the US make it difficult to argue that making an informed decision about voting for one’s representative in Congress is the most effective way to have a voice in political dialogs.

There is, however, a difference between having a voice in political dialogs (which? With whom?) and voting for Congressional representatives. Both are important and intertwined, but having a voice has always contained far more than the act of voting.

After a description of what political activists have always done, brought up to date (but “outside traditional political channels”), Zuckerman dubs them “self-actualizing citizens,” referencing a definition:

And code is the hacker’s path to self-actualization.

At the end of the essay, Zuckerman begins to see possible problems with his model:

But can democracy work if all citizens are effective at promoting and campaigning for their own issues? Have we seen evidence of a society with high, effective engagement and with the other characteristics we expect of a democracy? Should a group like Center for Civic Media be working on thinking through models of effective citizenship or considering the larger question of what a large group of effective, engaged citizens could mean for contemporary visions of democracy?

Is democracy even possible in a world where every citizen pursues his own idea of the perfect society, attacking others (perhaps only with code) at will, making himself judge, jury, and executioner? Isn’t this Hobbes’s all against all?

Government is about people in groups. Politics is about people in groups. Individual people have different ideas about the best way to live. But they must work together to assure clean water, build roads, provide schooling for their children, make available medical care and opportunities to participate in commerce, and other benefits believed necessary for modern life. So they have to find ways to work through or ignore those differences. That is the job of politics. Zuckerman has mistaken the beginning – forming one’s views – for the end of changing society. “[D]igital natives largely do not participate in civic affairs out of a sense of duty or obligation but a sense of personal fulfillment.”

This seems to be consistent with Snowden’s approach. Snowden tells us that NSA actions were unacceptable to him, without making clear his criteria for acceptability. That is to be enough and self-evident from the documents. Obviously we will all agree with him.

The material that has been released so far provides no clearer indication of the criteria being used. Some of the material may support his stated concern, that NSA is collecting too much data on American citizens. Much of the material, however, simply shows that the NSA has been listening in on other countries. That is what the signals intelligence agencies of all countries do. The United Nations has always been a particular target. Snowden’s flight to China and Russia, and his release of material appearing to ingratiate him with those governments suggest that he is quite willing to do whatever is necessary to assure his own well-being.

Julian Assange, one of Snowden’s protectors, has enunciated opposition to all secrecy by governments. The broad scope of Snowden’s revelations suggests that he agrees. In Assange, we again see expediency: he is quite willing to use secrecy and power for his own purposes, most recently occasioning a split in Australia’s Wikileaks party by his tactics. This may be very self-actualizing for Assange is doing what he thinks is right, but it undermines the ability to work in politics.

Within the hacktivist world, brother hackers have been turning on each other as their activities come under the scrutiny of the government. It turns out that we have a structure of laws, and that the government feels that it has a monopoly on enforcing them, however self-actualizing it may be for hackers to attack those they feel are evil. In the real world, that is called vigilantism. Over time, humans have found that laws developed by those chosen by that obsolete and unimportant process called voting work better.

But why should it be just young male hacktivists and code? Why not use the laws to put liens against those you perceive as your enemies, namely that government and its law enforcement personnel? Enough to drive them into bankruptcy and destroy that hated government? That’s how the sovereign citizens’ movement is actualizing itself. They want an end to government, and they are taking action. The means is different from what the hacktivists use, but the process is very similar, as the end is likely to be.

When voting becomes unimportant, a voted-in government becomes subject to the manipulations of those who want power. In America today, that would be a variety of commercial interests – the banks, the fossil fuel producers, the large corporations. And they will exercise it to the detriment of the self-actualizing citizens, working up their code. The greatest power individuals with keyboards, even working together, have is negative: stealing and exposing secrets, disrupting communications and commerce. Explain to me how to produce a digital March on Washington.

I think there’s value in testing one’s perceptions of good and evil in discussion with other citizens and coming up with solutions everyone can live with. I prefer the imperfect democracy we’ve got now to individuals making their own decisions and imposing them on the rest of us.

Some of the revelations are of concern and need to be investigated further. But I’d like to know why some were chosen and what we’re not hearing.

Posted by Cheryl Rofer at 1:17 PM No comments: