The defense called the photo inflammatory and objected repeatedly to the prosecution’s use of “fetus” and “baby” as interchangeable terms.


But of course this is how much of the media refers to fetuses and embryos now.

More from the New York Times.
Posted by Cheryl Rofer at 8:06 PM No comments:

A Visit From St. Nicholas - Updated 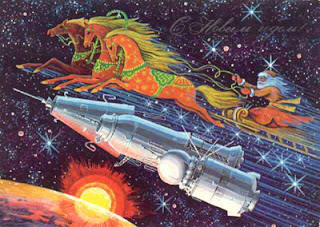 Both Russia and Canada have now claimed the North Pole.

‘Twas the week before Christmas, and at the North Pole
Ded Moroz worked to make the toys whole.
As the Russian sub traced the Arctic shelf,
Putin demanded the pole for himself.
And then, to cement the deal,
Ded must move to Santa’s weal.

GLONASS would track him, as NORAD does Santa,
And rule the Internet from Moscow to Atlanta.
As Santa arrived with his list of naughty and nice
He saw Ded and the Snow Maiden – was this the price?

“We preferred Velicky Ustyud,” Ded responded,
“As Sochi’s mascot I was defunded.”
Santa said “You’re welcome here, but the elves –
Yours and mine – are bumping into themselves.
Our schedules are different – we can share
And on our special nights be in the air!”

Elves Ivan and Charlie drew up the plan
And the rest agreed, even Hassan from Iran.
They rearranged workbenches and set up an inventory
Ensuring no child would have a sob story.

Documents and thumb drives went into the storeroom,
Still classified, not for Russian eyes, lest NSA lower the boom.

The night before Christmas, Santa was ready
As Ded’s elves were working steady.
Santa shook Ded’s hand and mounted his sleigh:
“Have some hot chocolate ready for me on the way.”

A vodka toast fueled Santa’s takeoff –
Ded followed NORAD’s tweets, behind him, a cough.
It was Vlad Putin, Ed Snowden beside him.
Headed toward the the storeroom the classified resided in.

“You’ve come to help our elves,” Ded greeted,
“Working harder than usual, help badly needed.”
A cold stare from Vlad – does he have any other?
Ded: “We can’t disappoint the children or their mothers.”
Ed Snowden said nothing and looked at his feet.
Vlad jerked Ed’s arm, still eyes didn’t meet.

Ed sat with the elves who were working on iPads
Programming them to connect to other doodads.
Ded looked Vlad in the eye, and Vlad got to work.
“But you’ve got to go before my partner gets back.”

The sub was not far – by the reindeer stable.
Vlad took out his smartphone and sent a cable.
A tiny smile tried to turn up his mouth,
But it took the hint and headed south.

As did Putin and Ed, after they put in their time,
Giving Ded a few quiet moments, sublime.
The chocolate was hot, but Santa wasn’t burned.
And then on to Ded’s obligation returned.

The sequence the same, the actors exchanged
On New Year’s Day, not too strange.
This time the sub discharged Keith Alexander
Who toward the terminal tried to meander.

The elves bedded down, no work for a year,
So Santa proposed some toasts of good cheer.
The terminal forgotten, Keith staggered back.

When Ded arrived, Santa gave him a hug.
“This time-sharing thing is a feature, not a bug!”
“You’re right – I’m not going back to Velicky Ustyud.”
That should work out until global warming or oil
Interrupts their work or tension comes to a boil.
A toast to our gift-givers and Merry Christmas/С Рождеством to all! 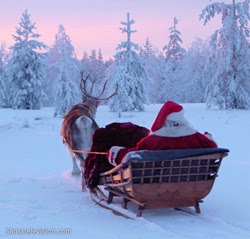 Breaking: NSA has been spying on children’s letters to Santa!
Graphics: Дед Мороз and Santa.

Posted by Cheryl Rofer at 6:46 PM No comments: