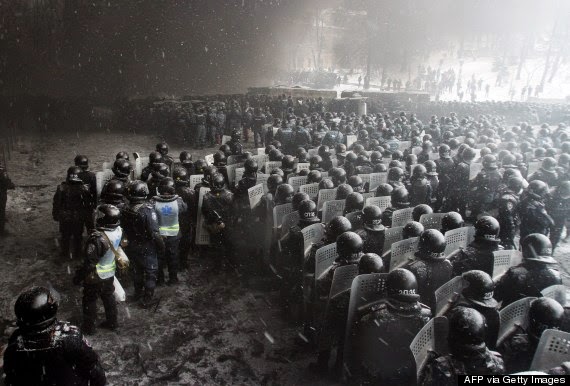 The Sony hack and later shutdown of the North Korean internet made me think of the last lines of “Dover Beach,” by Matthew Arnold. That made me think about the rest of the poem. It’s a good way to one year and start the next. Or at least in my quirky way of reading poems. Go read it through to get your impression. I’ll wait.
….
Read more »
Posted by Cheryl Rofer at 2:19 PM No comments:

This article pretty well represents my feelings about Greenpeace's dumb stunt at Nacza, Peru. They need to pay for the damage they've done.

It looks like the South Polar ozone hole is doing a lot more than letting ultraviolet rays in.

It has always seemed to me that the ethos of blogging and the needs of magazines are contradictory. Scientific American has been having some problems with that, and they're trying to do something about it. A magazine can never grant the freedom I've got here.

The strategic cost of torture, racism, and bigotry.

Belarus - the Soviet-style dictatorship that has been Russia's bff - is worried about the big neighbor to the east.

I don't have much to say about the Senate Torture Report. Maybe later. I need to do some assimilating. Here's as much as I can write now, with links to resources.

The association between exaggeration in health related science news and academic press releases: retrospective observational study. This is a scientific study looking at how scientific results get distorted by the time you read them in the newspaper.

Noah Berlatsky in The Atlantic:


Over here is Le Guin, taking a stand for science fiction on the grounds that "we will be wanting the voices of writers who can see alternatives to how we live now and can see through our fear-stricken society and its obsessive technologies to other ways of being, and even imagine some real grounds for hope."
....
It's no accident that the most ubiquitous, overwhelming sci-fi sub-genre around is the one that has the least to do with the future: superheroes. Much of the superhero genre, in fact, is devoted to the fantasy that we don't need to wait for technological marvels, but can experience them right here, right now. More, we can do so, magically, without the comfy old familiar world we know changing that much at all.

How fear plays into the frequency with which white cops kill young black men. Fear is a common thread through this story, the need some felt for torture after 9/11, and other pathologies. We need to get away from it.


When men aren’t thinking about being politically correct, they can sometimes be too, for lack of a better word, bro-y (or afraid of coming off as such). “And the flip side of men being jerks is that women worry that they’re going to be a target of that behavior,”

Best article around on the situation in Ukraine.

Vladimir Putin has really ticked off Angela Merkel. Joschka Fischer comes from a left-wing background, and he sees Merkel's stance as a coming of age for German foreign policy.

John Kerry was none too friendly, either.

Russian soldiers may be refusing to go to Ukraine. Notice that "may." I take reports from those with strong feelings about the situation in Ukraine provisionally.

Long report on the "Independent Republics" of Donetsk and Luhansk.

Americans Have No Idea How Bad Inequality Really Is And if they did, they wouldn’t want European-style solutions.


Posted by Cheryl Rofer at 8:02 PM No comments:

Despite the ideology of the past few decades that says we're all individuals who owe each other nothing, humans have evolved a cooperative, living together capability. Time to get away from the ideology and make use of it. And we are capable of doing that.

The graphic looks like Van Gogh painted it, but it's the cosmic microwave background. The search for dark matter is not going well.

Working in the Curies' laboratory.

I am not fond of marking up my books, but finding a way to make oneself question them (and the writing we read from the media) is a good thing.

I've had some run-ins with the foreign policy realists who like to argue that the trouble in Ukraine is all the United States' fault because we have been intruding on Russia's sphere of interest, making that enormous country with all its nukes feel insecure. This is how that kind of thing would work in a university.

The Death of Trust

So we have been told again that the death of a black man caused by a police officer is not worth considering - there is a video of Eric Garner's death by strangulation, the medical examiner said it was homicide, but a grand jury decided that there is no reason for a trial. The person who took the video has been charged, however.

September 11, 2001, was a turning point in many ways. One of them was that our uniformed municipal public safety officers were heroes. There were lots of heroes - all our military became heroes, until the sense of the word washed out into too many egos of those to whom the word was applied. Being a hero is a one-time thing, connected to a specific place, time, and act. But we made all-the-time, look at the uniform heroes.

Some blame the Vietnam War for today's splits in Americans' attitudes. For some people, it certainly represents ultimate wrongs of various stripes, but they seem to be few. Or, if there are more, they don't say much about it.

But we have had, much more recently, an even more stupid and venal war, although not as many died. That war, Bush's War In Iraq, was divisive, too, although not as noisily as the Vietnam War. You can see from the way I titled it which side I'm on. And it was so obviously wrong-headed and wrong-handled that those who want to feel good about America's wars show their support only indirectly: Benghazi. We should have left more troops in Iraq. John McCain takes it out by wanting to bomb everyone.

Then we elected our first black president. We. Elected. That means a majority of voters felt that was an okay, maybe better than okay, thing to do. And we re-elected him. At first, the racists were very careful, although a very few of their number were just fine with photoshopping him as a witch doctor or whatever bubbled up from their subconscious. But then the birthers, and "he's not one of us," and it's snowballed to an acceptance of open racism. You can google it.

And it all came together. The cops, many of whom were white, all of whom share the bedrock racism that psychologists have shown is in all of us, can do no wrong. They are heroes, even if the word is looking a little pale these days. The grand juries in Ferguson and Staten Island have given us the result.
Posted by Cheryl Rofer at 7:24 PM 1 comment: