The mass rally in Caracas was the setting for the President donning the famous Mexican sombrero and singing El Rey (The King), Mexico Lindo and Soy Monedita de Oro (I'm a little gold coin) to hammer home his affection for the Mexican People.

On the same platform were Foreign Minister, Ali Rodriguez Araque, Venezuelan Ambassador to Mexico, Vladimir Villegas relishing the limelight, a sheepish Nicolas Maduro and an assorted number of State Governors and Mayors and National Assembly deputies.

Here's an AP Photo from the BBC: 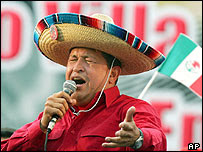 The speech, addressed to a rally of thousands, was reportedly mostly about using the recent friction with Vicente Fox as a way of ratcheting up criticism of the United States. Let's see if our president can respond any more intelligently than Fox.
Posted by barba de chiva at 10:02 AM