Ned has posted his review of the Ray Davies show. Read. It's delightful. Yes, Ray's face... what a document itself. As Ned mentions, Ray was shot in the leg in New Orleans a couple of years ago while chasing a mugger. There were complications since it turned out the bullet hit the bone. So, his jumps aren't like the one in this photo any more, but, rather little shuffling kick-leaps that are as much Ray Davies as his old-time Townshend moments: 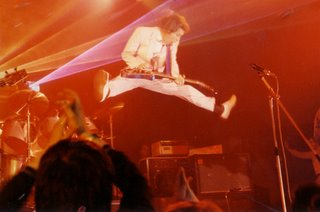 I have only to take issue with Ned's account of me being aggressed by a big lummox of a fratboy. Man, I was ready to go to the floor with him (where the guy was trying to put me) as if we were at Altamont, after the guy had been elbowing me and others around him for the past thirty minutes. I was all Bobby Lightfoot vs. Wilford Brimley on this one. Thankfully, my wife and a teenage girl - related to the kid who got the pick - stepped in between us and stopped the inevitable carnage I would have made of the guy's face. Judo-chop! I had the giggles on the drive home. There we were with this lovely guy Ray, listening to a great concert, and it ends with some guy grabbing me around the neck and gray-hairs around us calling him an asshole. (By the way, asshole blamed the whole thing on me and others standing in front of a guy in a wheelchair, who we had earlier made room for. But said asshole and his friend had arrived midway through the show saying to me that they wanted to make it to the very front. The guy in the wheelchair became his prop. This makes him doubly assholish.).

Damn that was a show! And, as Ned mentions, I got to meet Neddie in person for the first time and XTCFan, one of Ned's main commenters. Both good guys, and I look forward to getting into scraps alongside these guys at other shows. I'm just waiting for Joni Mitchell to make it into town. I bet I can kick some ass at that one. 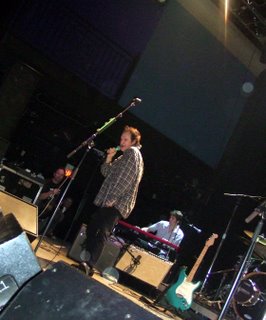 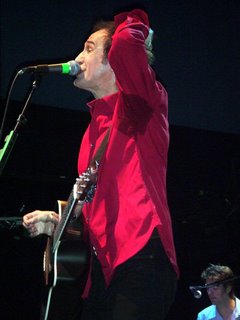 I once went three falls with Joan Baez. I'da whipped her ass, too, but the bitch pulled a fish-hook out of her trunks in the third fall and the ref stopped it for excessive bleeding. I want a rematch, but I can't get it set up due to the terms of the protective order.....

Dude! That Baez is known for hitting below the belt. Try a match with Vashti Bunyan. Glass jaw, I tell ya!

BTW, I found out later that the teenaged girl was not the sister of the kid with the pick. I thought she was, too, but when I asked him about it later (when we were waiting in the cold, trying to meet Ray), he said she didn't know who she was. I guess he made us all feel protective of him.

Glad you posted the Bobby link. Best. Fight. Ever.

No, XTCFan, not Joni's ass, but the ass of the big lummox who has to elbow kids to get to the front so that he can get sweated on by Joni.

Thanks for the info on the kid. That was part of the problem. Lummox was pushing me into the kid. The kid was getting worried.