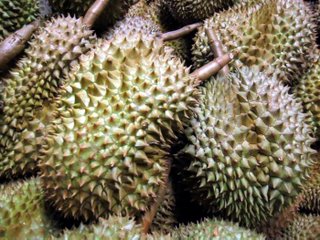 World Cup Update -- Another Reason to Root for France:

Spain’s coach Luis Aragonés last night refused to apologise before this evening’s second-round game against France in Hanover for racially abusing Thierry Henry in 2004, insisting rather bafflingly that he has “black, Gypsy and Japanese friends, including one whose job is to determine the sex of poultry."

I'm suprised he didn't accuse him of smelling like a Durian!

Yeah, there's quite a history with the Spanish league. Fans have been throwing bananas on the field and making monkey noises when the likes of Samuel E'to come on the pitch. He protested and Aragones' remark was his protest exacerbated the situation. Classic racism: the victim is at fault.

Aragones did it again in the match with France yesterday. Zidane had words with him, Vieira put his fingers to his lips. The ref finally had to speak to him.

Lonely Planet's guide used to say you could see "No Durian" signs on public transportation in Singapore, supposedly because of the odor. Durians do smell foul, but since Singapore bans chewing gum as well, their alleged durian policy may not be so telling.

I've seen those signs on the doors of hotels.