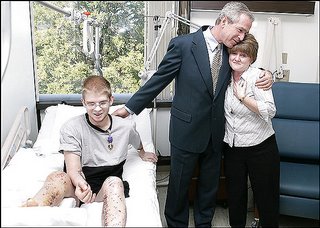 This photo, with this caption - "President Bush hugs Anita Kukkola after presenting her son, Pfc. Jason Kukkola of Fountain Hills, Ariz., with a Purple Heart at Walter Reed Army Medical Center in 2005. (By Paul Morse -- White House Via Associated Press)" - accompanies this article, which says this: "White House spokesman Tony Snow said the president, like his predecessors, "lies awake nights asking himself the question: How can I get this done and get our people home?" But Bush controls his feelings around associates. "He keeps a lot of that very, very locked up inside himself," said a longtime friend. "I don't raise it with him. I just don't feel comfortable doing that."... Bush deals with stress through vigorous exercise, working out six days a week. When he goes for long bicycle rides, he often invites others to join him, but he asks them not to ride in front of him so he can have the illusion of solitude. "Riding helps clear my head, helps me deal with the stresses of the job," he told reporters last month after an 80-minute ride."

Things seem to be working out for the conscience of the illusion man.
Posted by helmut at 1:11 AM