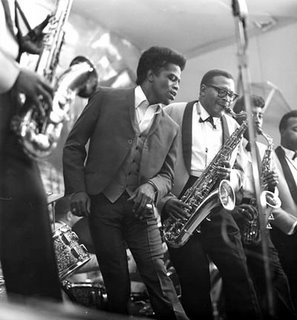 What kind of world doesn't have James Brown in it? There's a very short list of true "legends". Look for JB up near the top.

Now some are getting their knickers in a twist about all the encomiums directed toward a domestic batterer. OK. Take Al Jarreau, for example. Very talented, doesn't hit women. Still couldn't carry JB's cape back from the dry cleaners.

Well, Roxtar, that had to have been one hell of a dry-clean bill.

Yeah, it's a bit like the "Heidegger debate." Is it the case that an awful man can't possibly write philosophy worth reading, or we ought not to read it because he was execrable?

Anyway, with James Brown it would be impossible to extricate ourselves from his influence, even if people didn't listen to him.

You remember what happened to the last guy that was perfect? James was not in risk of having that label attached but there has to be some cosmic balance where what he gave outweighed what he screwed up.

Not to mention he grew up a black orphan in the Depression era south and spent three years in prison as a teen. Democracy Now broadcast a nice piece on him.