Have a New New Year 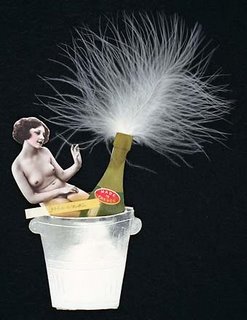 A year of death and infamy limps to a whimpering close. A new one awakes tomorrow with a terrible hangover that will likely remain for years. We all know the story, so I won't attempt to provide a year-end wrap-up or another top ten list.

Personally, some very nice things happened this year and the coming year looks terrific. Life is good, work is good, play is good. There are lots of surprises, humor, temporary drawbacks, new openings and experiences, and a coming year that will be pivotal. Two books coming out this year, another on its way - this is the reason I've been lax about writing on the blog recently, and a bit perfunctory with my own comments. Hopeful changes in career, with a few giant occasions that will also affect the blog for the better, I hope. A new bicycle. New places to visit. Deeply beautiful and generous friends, new and old. The lovely and talented Helmette.

As for Phronesisaical, we'll continue along our way. Some history for those who don't know... This blog started in June 2005 on a whim. It was about 3am, I had been out for drinks with friends. I came home, checked the news and some blogs. I clicked the "Get Your Own Blog" icon just to see what it took to set up a blog. The process was quick and I ended up with a blog asking me what name I would choose. The Complete Works of Aristotle happened to be sitting on my desk (and I thought about that for the name). I had been doing some work on the Greek notion of phronesis, "practical wisdom," the intersection between practical lived experience and theory. I chose the term for the blog title. But it was, obviously, a pompous title for a blog, so I tried to dilute it and affix the suffix for "maniacal." But, being 3am and all, I misspelled the suffix as "-aical" and submitted the blog. I noticed the error and had a chance to change it, but I kind of liked the randomness of the whole process and decided to leave it, thus ensuring that no one would ever arrive at this blog through a Google search by blog title. I do politics, philosophy, and international affairs, so that was an easy choice for the theme. I like fruit and, at 3am, it sounded refreshing. I chose anonymity for career reasons - this might soon change. My first post said "blogging is hard." My second post called Lleyton Hewitt a "roo-penis." Such was Phronesisaical's humble - nay, ignominious - beginnings.

Today, we're bouncing along. I originally had some ambitious fantasy of being a more theoretical version of Atrios, but quickly figured out that blogdom was mostly saturated with the big folks already and that attempting this would be a fulltime job, which I can't do. I dumped the ads and ambitions and went with what you see here.

We've managed to gain a nice group of regular visitors. When you comment, you're smart, funny, entertaining, rabble-rousing, and informative. I mean this in all honesty: you are the reason I continue this blog. At moments of weak readership, it's not easy to be motivated to continue. Blogging and desiring readers are one and the same thing. At moments of heavy readership, however, it feels a bit like a supermall with most people passing through, slushies in hand, and the blog trying to advertise its wares. Over time, I've realized that we're very fortunate to have gained such a good, relatively small readership. Instead of a supermall, we've got a neighborhood record store, and I would much rather spend my time here. Quality over quantity. Even those who vehemently disagree with the content usually do so in civil tones. The worst I've been called is "retraded" [sic], which I will heartily accept. Helmut the Retraded. I don't know how you, dear reader, ever found us in the first place, but thanks for hanging out, and thanks for helping to make this a blog.

May the new year bring you good things, hilarity, new and surprising experiences, and whatever you need for your life to be rich.
Posted by helmut at 11:00 AM

You can never go wrong in warmly appreciating your readers. Proud to be one. Happy New Year.

It's been a delight to read and learn from the postings I discovered so late in the game. A nice stream of knowledge that stretches back to the indistinct past, and forward to the indeterminate future.

Best of the new year to y'all.

You forgot to say we're good looking. Anyway, that was more appreciation than I deserve, and I appreciated it all. Happiness and lots of luck to you in 2007.

Thank you for one of the smartest, most enjoyable stops in the blogosphere. Oh, and MT, you're ALWAYS looking good.

Hilarity...Yes, we need some of that.

Here's to more hilarity this year, which may even include some more rotten oranges and lemons.

I don't read many blogs, but I visit this one almost daily. Where else can you get tropical fruit along with philosophy and righteous indignation?

Thanks and Happy New Year.
Peter

Ditto Pete, and I'd like to add a rare, wry ,sense of humor to that list. keep up the great work, Ill do some more linking!
Trout

I think you are loopy but I do appreciate your taking the time to post your thoughts. very valuable insights into alternate world views. Thank you so much! Truly!

Thanks for the kind words, everyone. Happy New Year.

Was Anon - well, you're a wackjob, but I really do appreciate you coming by, reading and commenting. Keep working on trying to make some sense! You'll get there, bucko!

Happy New Year to you Helmut & Co of the Phron! Blog on!

i appreciate what u had done