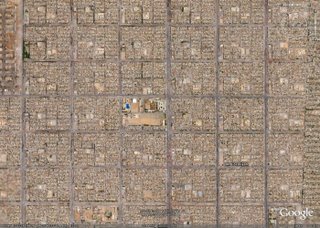 And here's an excellent, brief piece by Patrick Cockburn on Moqtada al-Sadr. Read.

Many Iraqi leaders never leave the Green Zone. Sadr has never entered it. He has a cult-like following. He controls Sadr City, the ramshackle, sprawling slum in east Baghdad which is home to two-and-a-half million Shia, important cities such as Kufa and provinces such as Maysan. He can probably put 100,000 armed militiamen into the field. Much of the Baghdad police force follows him. Army barracks where Shia units are stationed have pictures of him pinned to the walls.

Once in 2004 he was wanted "dead or alive" by the US forces and dismissed as "a firebrand". They soon found that his movement had deep roots. He controls 32 out of 275 seats in the Iraqi parliament. He is the most important ally of the Prime Minister, Nouri al-Maliki. In 2004, the US and its former exile allies paid a heavy price for trying to exclude him from power. In 2005 and 2006, they recognised his strength. He became part of the political process in Iraq while opposing the US-led occupation.

Now, astonishingly the US may be about to confront Sadr and his powerful social and political movement. This could lead almost immediately to a crisis for the US and President Bush's new strategy for Iraq.

If the US Army, along with Kurdish brigades of the Iraqi army, do assault Sadr City, they are unlikely to win a clean victory. The rest of Shia Iraq is likely to explode. A confrontation will convince many Shia that the US never intends to let them rule Iraq despite their success in the elections. The US is already at war with the five million-strong Sunni community and is now fast alienating the Shia. For the first time this year, polls showed that a majority of Shia approve of armed attacks on US-led forces....