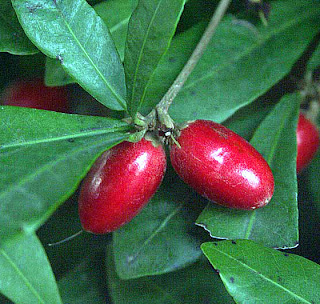 “What’s Miracle Fruit?” people asked, reading the white paper sign affixed to a bulletin board next to the table. Najafi handed out cellophane wrapped berries the size of lima beans. Kircher Society meeting participants ate the fruit as Najafi cut the limes into quarters. “Don’t eat the pits,” he told them. “Just chew and coat your tongue with the fruit.” Moments later, people were biting into limes as if they were apples. Everybody started to smile. Eating Miracle Fruit somehow makes sour food taste incredibly sweet.


Miracle Fruit (Sideroxylon dulcificum) was documented by an explorer named Des Marchais during an 1725 excursion to West Africa, according to Sina Najafi’s interview with Adam Leith Gollner, which can be found in the current issue of Cabinet. Marchais noticed that local tribes picked the berry off shrubs and chewed it before meals. From there, the amazing Miracle Fruit was seemingly lost in the shuffle of colonialism, and was later tested by the U.S. Army and several pharmaceutical giants before being rejected suddenly by the FDA in 1974, under mysterious, X-Files type circumstances (a “high speed car chase;” “men in sunglasses”). Gollner is working on a book examining the “fruit underworld,” including the sad odyssey of the Miracle Fruit, which is legal in many other countries. In Japan, some Weight Watchers-style meals revolve around it, and miraculin can be purchased in tablet form.

It is thought that the active ingredient in Miracle Fruit, or miraculin, is an ordinary glycoprotein molecule with some trailing carbohydrate chains which somehow change the way our tongue perceives taste. The effect, which wears off in a few hours, “isn’t like sugar, because [miraculin] isn’t exactly a sweetener,” Gollner says in the Cabinet interview. “It’s an elusive, illusory effect that depends on what you eat afterwards. With lemons, it has a kind of deep sweetness.” While some dismiss the berry’s properties as a useless food gimmick, a Mentos and Coke sort of thing, consider that chemotherapy patients in Florida currently have limited access to the fruit, because it restores appetite for some whose palettes have been destroyed by massive doses of radiation. Because the fruit has a more prominent effect, than, say Splenda, it also has implications for diabetics. It doesn’t matter if one can bake with it- Miracle Fruit changes the way that people eat to begin with. Gollner cites the results of a pre-FDA ban focus group in the 1970’s: “Miralin placed ads in diabetes periodicals and offered free samples to diabetics. They scored an enormous success rate; 85% of people who received the free samples wanted to order more.”

Article here (via Decorabilia)
Posted by helmut at 3:42 PM

I bought some from http://miracleUK.info/ and it’s actually amazing. So much better than I thought - it really works. Everyone should try this once.

Hey, I got mine from Miracle Fruit World. The post office accidentally damaged the item but I got a replacement from the vendor (for FREE). Great service, reputable! Enjoy the fruit as did I! Bye

I was delighted with the service and will order again!
They also have some great recipes and great support in different languages. Highly recommended!