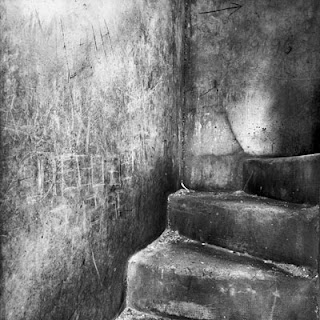 “I went down about twenty or thirty steps and I heard big iron doors being shut. I imagined that the place was underground, that it was big, because you could hear people’s voices echoing and the airplanes taxiing overhead or nearby. The noise drove you mad. One of the men said to me: so you’re a psychologist? Well, bitch, like all the psychologists, here you’re really going to find out what’s good. And he began to punch me in the stomach. MARTA CANDELORO WAS ABDUCTED ON IN NEUQUEN. SHE WAS THEN TAKEN TO THE , ‘LA CUEVA’.” From the series, El Lamento de los Muros, 2000-2005. Digital print on fine arts paper.

I've just finished editing the proofs on the torture collection (thus, the low level of posting recently). It's first being published as a special issue of the very fine journal, South Central Review. It'll soon afterwards come out as a book. The journal will be out by March, I believe, while the book will be somewhere around late spring or early summer.

Reading through it again I've realized just how good it is. Each author did something terrific, thoughtful, difficult. And the cover photo is by the great Argentinean photographer, Paula Luttringer, who was herself "disappeared" during Argentina's dirty war. She kindly allowed me to borrow it for the collection.

I'll be shamelessly promoting it once the collection appears in print, but for now here's the lineup of contributors and Paula's cover photo.

Fantastic lineup. The photo reminds me of the background in a Leon Golub painting.