Fear and the Physical Environment 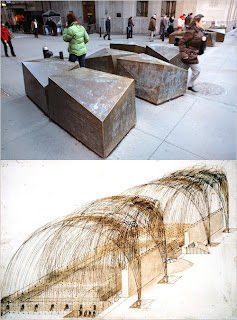 Most people walk through our built environment without much thought as to the extent to which its structures and patterns reflect not only the whims of architects but also the collective psyche. The reflection runs two ways, however: culture shows up in the structures, and the structures shape in subtle ways how we live. A number of very good books have explored these cultural shapes and shapings: Lewis Mumford's massive The City in History, Jane Jacobs' classic The Death and Life of Great American Cities, Michael Sorkin's collection Variations on a Theme Park, Mike Davis' Ecology of Fear, among others. Several years ago I edited a journal issue (Philosophy and Geography) on urban environmental ethics intended to look at the issues of how the built environment is structured by and structures the moral imagination.

All of this is to say that there exists a long lineage of studies on the nature of the city, especially pointing out that the American city was going in the direction of what Davis says of Los Angeles, "fortress LA." Most of this move started from developers' images of what a clean and safe, urban business environment should be. This meant exclusion of what they perceived as unclean and unsafe and non-conducive to business. Davis, for example, discusses barrel-shaped bus stop seats, designed to make it impossible for the homeless to sleep there, and park sprinkler systems in downtown LA designed to start up at hours during the night when homeless people might be trying to sleep there. Jacobs discusses spaces intended to isolate and individualize the human experience within them as an ostensible safety device when it is precisely the "eyes" of the crowd that provide greater security. 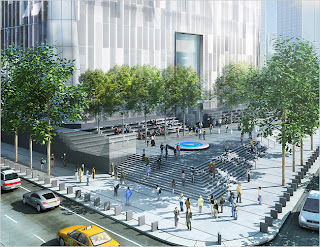 It's really no surprise to see this article in the NY Times today. No surprise, that is, that Fortress America can be a topic of discussion. I live in Washington, DC, the center of it. It's real. But it is surprising that anyone cares. We have, after all, fetishized fear. It runs our foreign policy; it runs our domestic social policy. When fear becomes this natural, it's a surprise that we can continue to see the fortresses of our daily life at all.

Does it matter that we're turning the aesthetic of our lived environment into simply a function of utility and security to this extent? Yes. Because it is a reflection of who we increasingly are and who we are increasingly has little to do with the actual nature of threats, the existence of threats, and intelligent responses to them, and more to do with a realm of fantasy in which we believe erroneously that everyone wants what we have and envies us for it. They want to destroy us and our self-satisfied symbols of freedom and prosperity. We must protect it. But what, precisely, is the it that we are so desperate to protect? I'm not so sure we have any idea. 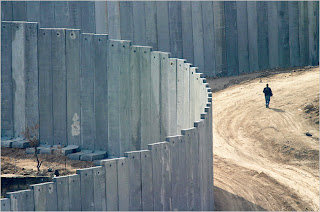 The author of the NY Times article writes, "[t]o some, compromise may be preferable to surrounding our cities with barbed wire and sandbags. The notion that we can design our way out of these problems should give us pause, however. Our streets may be prettier, but the prettiness is camouflage for the budding reality of a society ruled by fear."

"Pretty," however, might just become synonymous with the way in which the perspective of fear looks out at the world and sees "security."

Materialism can be so boring but in this case im going to stick with it and propose what the "other", mos5t of whom live on less than 2 dollars a day, wants is the other 98 dollars.So a fortress makes perfect sense. Fascismo style tends towards the sleek and minimal,the shiny repetitive fascade behind which power lurks.

a couple of excellent sites:

I'm not so sure about that other 98 bucks, Troutsky. There are an awful lot of people in the world who would be pretty pleased with what counts as just getting by, if they were. This could always, of course, raise expectations for more. But one could say that the choice - that is the basic capacity in terms of basic income, education, health, etc. - to accumulate more or make do with what one has is more important than actually getting another 98 bucks.

I tend to think the issue is more a matter of a certain culture believing that's what people not-like-them want because their very own ideology tells them that's what all people want. This is the root of the fear.

Dubrovnik? Jaiselmeer? Jerusalem? Nothing's more romantic and appealing than a fortress city, dude. Not to mention Superman's "Fortress of Solitude" and how a man's home "being his castle" we suppose to be a good thing. "We like being islands," or whatever that Donne guy said. Anyone who says otherwise doesn't truly love our King.