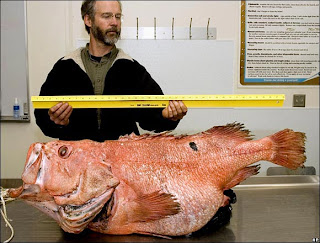 I read about the capture in Alaska of this giant, 100-year-old rockfish with sadness. There it is on a scientist's table, caught in redolent rigor mortis, its mouth agape. The marine scientist - like millions of glory-seeking scientists before him - is present in the picture solely to provide scale. Damn, that's a big fish, everyone says. Thus is consummated the purpose of the life of this particular rockfish: the dénouement of 100 years of survival in the depths of the Pacific Ocean is the fleeting astonishment of humans before they move on to funny animal videos.

In the mid-1970s, in Bangkok, I lived in a neighborhood compound on Soi Ekamai. The neighborhood had about a dozen families and was owned and managed by the prime minister's wife. My best friends were two English brothers, Adam and Benji, and two Thai boys, Go and Pi. We thought of ourselves as very cool, unlike our school-fellows whose lives were filled with embassy functions, piano lessons, and turning Bangkok into the expatriate's mirror of home. Bangkok was still full of klongs (คลอง) at the time (today, they're mostly filled and paved). You could go by boat from our neighborhood to the Chao Phraya River, a couple of miles away, through the system of smaller klongs leading to larger ones and finally to the rivers, passing through other neighborhoods, temple grounds, and markets along the way. We played among the klongs in our neighborhood, filled as they were with water snakes and frogs, a fish we called "grami," lily pads, and a sense of exploration.

One of the klongs extended underneath the prime minister's wife's house. She had a giant place, built, traditionally, on stilts above the klong. The klong had been separated from the other waterways into a pond. It was covered in lily pads, full of fish of various types, and extended to a rusty dark depth. It was home to "The Big Fish."

The Big Fish was a legend in the neighborhood. We insisted on its existence to our parents, who mostly humored our childhood mythologizing. No, really, The Big Fish exists. I saw it, but only once. My friends also saw it. It was truly big. And it was orange. Most likely some type of goldfish let loose into the "wild" to develop into a Leviathan. My friends and I would often stop by the pond during daily adventures to sit and watch for The Big Fish. Sightings were very rare among any of us, but we had all seen it. It moved up from the depths to swish at the surface before plunging into the black, deeper parts underneath the house. It was a beast so large that its movements were like a giant ship on the ocean and the illusion that its speed and strength turned everything around it into slow motion. 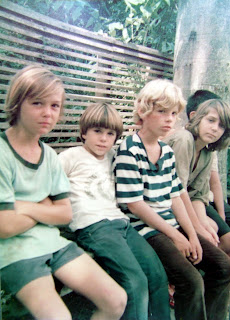 Once we had seen The Big Fish, which had required patience and belief in the demigod, we postulated the existence of an even larger Big Fish, The Big Big Fish. My friend Adam, the eldest of us, insisted he had seen The Big Big Fish, though no one else had. Once you've explained the universe, the human urge is to postulate a further prime mover. The Big Fish, in its small way, had instigated an infinite regress in the neighborhood cosmology. We hadn't worked out causality yet - simply mass and energy - although we were close with the postulation of the mother fish. I found myself drawn to the pond even when none of my friends were around. I'd sit and watch for The Big Big Fish. When none of us apart from Adam managed a glimpse of The Big Big Fish, the story arose (in that organic way that, among children, stories "arise" seemingly without origin or attribution) that The Big Big Fish might have died. Perhaps, we surmised, we were waiting on something that no longer existed. In this case, our watching at the edge of the pond would be pointless.

In the late 1980s, I returned to Bangkok as a solitary traveler and visited the old neighborhood on Soi Ekamai. I checked out the pond and sat for a while at its edge. No fish at all, no gramis, nothing.

When I see the 100-year old rockfish laid out on the scientist's table and subject to the adult's measurement ("damn, that's big!"), there's a sense of loss. It's not the measurement that's astonishing. It's the end of that particular fish life. It is The Big Fish. But there is no Big Big Fish. Or the hope. There isn't another 100 years or more for such fish. There is a definite end in this here life with nothing to follow except the measurements.

Top photo: AP/BBC
Bottom photo: Watching for The Big Fish, photo by Mother Helmut
Posted by helmut at 8:32 AM

It has been a while since I've visited these environs, Helmut, but what a pleasure it was to come back and find a post as poignant as this.