The Toll of Mining 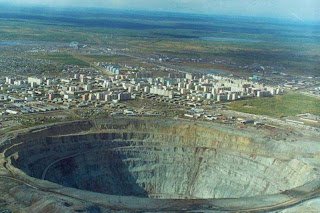 Open-pit mine in Siberia
While much of the world focuses on the geopolitics of oil exploitation, mining remains one of the largely hidden modes of resource extraction known for its high human cost and exploitative and corrupt political arrangements. This is at the root of Bolivia's recent leftward shift, for example, although the US press only seems to understand Bolivia as a puppet of external political interests. The central concerns are control of national resources (the main source, after all, of revenues for especially least developed countries); water and air pollution; exploitative labor arrangements; long-term health problems for workers and locals; and the oft-corrupt contracts that are a boon for national/local elites and mining companies but a disaster for the citizens of the country. Mining usually takes place in areas of high poverty. Curious, that. It thus opens the issue as one of environmental justice - why should income level determine whether or not one has a right to a healthy environment?

When I was in Honduras last year, there was a protest that shut down the country's main highway. Asking around about the reasons for the protest, I learned that the demands centered on a mining law that allows open-air mining and opens up thirty percent of the country to mining firms while these firms are required to pay in return only one percent of their revenues in taxes. One percent.

A lawsuit on behalf of the island of Bougainville in Papua New Guinea making its way perhaps to the US Supreme Court demands restitution for upwards of ten thousand deaths over a decade and a half of copper mining at Panguna by the mining firm Rio Tinto. The case encapsulates the complex issue of mining: its politics and its human disaster. The story omits the consumer end.

In November 1988, militants forced the mine to close through blowing up power pylons and other acts of sabotage. For a decade following the mine’s closure, a war raged between the Bougainville Revolutionary Army and Papua New Guinean and Australian military forces trying to quell the independence movement and reopen the mine. By the time a ceasefire was signed in 1998, more than 10,000 Bougainville residents—about one-tenth of the island’s population—had been killed.

The lawsuit alleges that, in addition to the 10,000 dead, the mine also caused the destruction of a way of life—the matrilineal tribal and subsistence fishing and farming culture that earned it the name “Sacred Island.” “A deep sense of social malaise set in, which expressed itself in clan tensions, depression, alcohol abuse, rage, traffic accidents and incidents of violence—all distress signals of a people severed from their roots,” the suit claims.

The suit quotes tribal leader Perpetua Serero, who says, “We don’t grow healthy crops anymore, our traditional customs and values have been disrupted and we have become mere spectators as our earth is being dug up, taken away and sold for millions.”

Note: It is curiously difficult to find photos of Panguna. The ones below are borrowed from here. 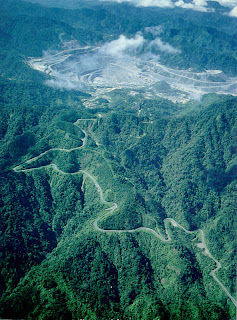 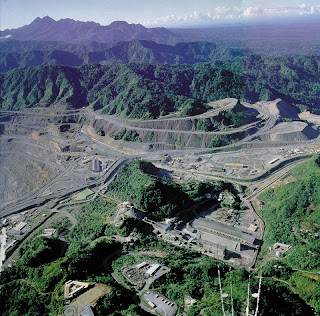 Regarding "the Toll of Mining" I have found a great source for related news;

RE:Old Argentinian uranium mine gets new lease of life

The Don Otto uranium mine in Argentina is to start up again after being closed for over 25 years. Uranium was mined at the Don Otto mine on and off between 1963 to 1981. Over the last two years uranium prices have climbed dramatically, meaning companies are reexamining whether old mines can be operated profitably.

... and here is another article from probably the best Nuclear news site in the world:

AREVA, the French nuclear giant, have signed a contract worth more than one billion euros to enrich uranium for KHNP (Korea Hydro and Nuclear Power Co Ltd).

KHNP is a South Korean company that operates 20 reactors and has another 8 in the pipeline, this makes it the fourth largest nuclear power plant operator.