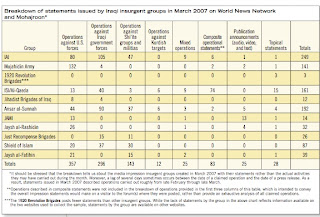 Chart from RFE/RL
It's nice to blame everything in Iraq on al Qaeda, as is the official administration line to the public. This makes the war more understandable and gives the public an easily identifiable foe. But it's also untrue and perhaps counterproductive.

Abu Aardvark has a terrific post based on this RFE/RL report outlining the diverse factions in Iraq. The chart above shows different factions, numbers of attacks claimed by each faction, and so on. The Bush administration, however, insists on presenting a public story of a "war on terror" where the opponent is al Qaeda, which must ultimately be defeated on a global battlefield. That is a fake war since the chart above could be expanded to other countries as well, showing that in Indonesia, for instance, not all militant Islamic groups have any connections whatsoever to al Qaeda. Furthermore, one wonders about the degree to which al Qaeda is indeed an American creation. There's certainly a core group led by Osama bin Laden, and there may very well be connected cells placed around the world. But characterizing al Qaeda as the guiding, organizing, opposing force makes for a neater public story than attempting to explain the complexity of positions, demands, interrelations (and lack thereof), and political connections.

It must be further noted that many of these groups - whether in Iraq or elsewhere - did not exist prior to the invasion of Iraq.

the labeling of all violence as al-Qaeda has the effect of shutting down discussion of the political goals of the insurgency factions - at precisely the time when comprehensive political dialogue in Iraq is most urgently needed. At a time when everyone claims to recognize that the military efforts will only matter to the extent that they produce political reconciliation, this would seem to matter. Shrinking the field of Sunni positions to 'cooperating with the US' and 'al-Qaeda' simply defines away the overwhelmingly dominant political stance within the Sunni community - the nationalist, anti-US and anti-Maliki line represented by the major insurgency factions, the AMS, and so forth. This risks someday becoming a textbook example of tactics defeating strategy.

But the real harm comes in the wider Arab and Muslim world, where the exaggeration of al-Qaeda's role works directly and devastatingly against American goals. It magnifies al-Qaeda's perceived power, strengthening its own media campaign and feeding its most powerful propaganda instrument. Attributing all these attacks to al-Qaeda certainly doesn't hurt al-Qaeda's image: Iraq is the one place where al-Qaeda's violence is actually widely supported in the Muslim world (a recent PIPA survey found that over 90% of Egyptians thought that attacks on American civilians were against Islam and illegitimate, but over 90% of Egyptians thought that attacks on American troops in Iraq were legitimate). The administration in effect claims more power and military success for al-Qaeda in Iraq than al-Qaeda claims for itself - for which the al-Qaeda leadership can only be bemusedly grateful. Forget al-Hurra - if you're looking for a real public diplomacy fiasco, you'll be hard pressed to do worse than the US acting as al-Qaeda's agent in promoting its Iraqi success.