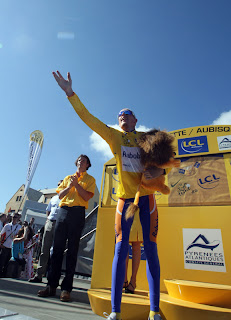 Photo: DOMINIQUE FAGET-AFP-Getty Images
One of the problems with doping in cycling is that it elongates one's legs unnaturally (see photo - that's Michael Rasmussen, the current leader).

Ha ha. Really, kids, doping is no laughing matter. Today one Christian Moreni, Italian from the Cofidis team, got his entire team retired from the race when he tested positive for testosterone at the finish. Unfortunately, the highest placed Frenchman this year, Sylvain Chavanel, is a rider for Cofidis.

Rasmussen won the stage after furious attacks on the final mountain, the Col d'Aubisque. American Levi Leipheimer was second with Spaniard Alberto Contador third. I think Rasmussen won the entire race with his performance today since this gives him a 3-minute gap on Cadel Evans, who is the only real threat to pull serious time back from Rasmussen during the time trial on Saturday. Today was Contador's final opportunity to try for the yellow jersey. He'll now work to hold onto his second place and will be satisfied with the white jersey of the best young rider. This leaves only a battle between Leipheimer and Evans for the third podium place. Given that Evans is a better time-trialist, Leipheimer will have an extremely difficult time moving up from fourth. But fifth place, Carlos Sastre, is too far back to take away Leipheimer's fourth spot. So, barring accident, that looks like the podium, folks: Rasmussen the winner, Contador second, and Evans third. Soler has won the polka dot jersey of the best climber on this last day in the mountains. The sprinters' green jersey is currently owned by Belgian Tom Boonen, but it will be up for grabs over the next few days. Go Thor.

The doping noise and excitement of today's race came after a brief sit-down protest at the start by French riders tired of the smearing of their great Tour. And it is a great race. For sheer physical derring-do, mind over matter, there's nothing like it in the world. A 200-kilometer ride through the Alps or Pyrenees amongst people with unnaturally shaped lungs and thighs and a bearded devil appearing at the side of the road is itself hallucinatory. The race has great feats of courage, wonderfully sneaky tactics, and lovely gestures of sportsmanship among the riders. The "tour" is a perfect advertisement for the tremendous beauty and diversity of the country. I, personally, love the race more than I do any particular riders. I don't think the doping scandals can destroy the race, as some overwrought commentators suggest.

In fact, dope has since at least the 1920s, been part of the Tour de France: cocaine, heroin, alcohol, opium, cigarettes, amphetamines, in addition to the various new drugs and techniques to manipulate blood chemical levels banned on the current Tour (for a good discussion of current techniques and a dash of conspiracy theory, see this article). Testing only came to the fore when British rider Tom Simpson collapsed on the Mont Ventoux in 1967 and died of heat stroke sometimes thought to be linked to drug use (for a good, quick history, see here). Mitch Mueller writes,

Before World War Two amphetamines were synthesized and athletes immediately understood the advantage they gave. Through the fifties it was clear to observers that riders were doping. There were pictures of racers with dried foam on their faces or of riders driven mad by a combination of heat and amphetamines stopping in the middle of a race to find relief in a fountain. After riding until he collapsed Jean Malléjac lay on the ground still strapped to his bike, his legs convulsively pumping the pedals. Others would remount their bikes and go the wrong way. Sometimes one could almost follow the route of a race by the trail of syringes left by the side of the road. Roger Rivière crashed in 1960 because he had taken so much of the opiate Palfium to kill the pain in his legs that he couldn't feel the brake levers. Bahamontes said that he loved a good hot day in the mountains because the riders juiced up on amphetamines couldn't take the heat.

Doping in the race today is simply more sophisticated. It's also more widespread. What to do? I don't know. The race is legendary, and is far greater than any given rider. But what happens when nearly all riders are doping in one form or another? Although this is probably not the case, the only answer can be stronger testing so that all riders are starting from the same advantages or disadvantages of their particular natural physiology, training, and skill. The big thing the Tour has going for it regarding doping is that it tests and it tests. It often catches riders cheating and it sends them home. This is much more than we can say for most sports. When the director suggests that the Tour is winning the "war on drugs," I think he's right to a degree, but in terms mostly relative to other sports. If there was serious testing in American football or baseball, would we be able to hold onto those sports as national pastimes? We do while suspecting as much about doping in these sports, but there's so much money and history involved that we don't want to admit it. The Tour does have this over other sports - its struggle for honesty exposes some real ugliness.

The reason there is such outrage over doping in cycling - when it's not bandwagon outrage - is not only because doping is widespread but because the Tour is sublime.

Wow, big news. Rasmussen has been dropped by his team and is out of the race.

The expulsion, which Bergsma said was ordered by the Dutch team sponsor, was linked to "incorrect" information that Rasmussen gave to the team's sports director over his whereabouts last month. Rasmussen missed random drug tests May 8 and June 28.

I'm tired of the doping, but I don't think I'm as tired of it as the majority of the riders. I've always felt like doping was at the heart of the great Spanish rider Miguel Indurain's retirement. I don't know that he always rode cleanly, but I'm pretty sure that he realized the only way he could win again after losing to Bjarne Riis and then Jan Ulrich was through certain extracuricular activities that he didn't want to participate in.
When people say "twenty-twenty hindsight" they should really say "twenty-fifteen" or something of the sort, because it's often better than "perfect" vision. That noted, I was shocked at Rasmussen's holding on to the jersey. He's never ever ridden anywhere near that well. He'd win one alpine stage and then hang on to the polka dot jersey until Paris, never to figure in a battle for a stage win again.
But I wasn't nearly as shocked by his performance as by his team giving him the toss. It was the equivalent of the Bulls throwing Jordan off the team in the sixth game of the NBA finals, or the Colts getting rid of Manning in the 4th quarter of the Super Bowl. Is it even conceivable that the Giants might get rid of Bonds? Not really.
Of course the Giants would get their asses handed to them in a law suit were they the slightest bit inclined to perform such a house cleaning. Which brings us around to a particularly "non-american" aspect of the Rasmussen firing, his dismissal without a guilty conviction. That said, it seems that Rabobank did the right thing, and a very sporting and brave one at that.
All of this rambling is to say I think the rider's are more tired of cheating than we are, and a team's willingness to sacrifice their victory in the Tour is a great indicator of that.
And another thing...although I can't see John Edward's $400 haircut under that helmet, I can see that he's wearing running shoes while riding a bike that probably cost a minimum of 3 grand. That's really sad, but maybe it saves him from looking like a fag...