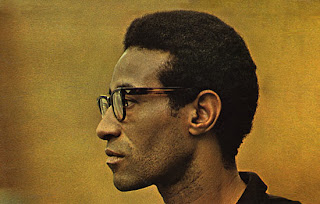 Max Roach died yesterday at the age of 83. In the pantheon of jazz legends, he was near the very top for me. It's not often that drummers can attain the Valhalla of music history. They're often the utility players in music, ever-present but mostly just keeping things going in the background. Now and then, they get a solo. Of course, there are the great ones in jazz. And of course there are great drummers who cut across genres.

Max Roach, however, was special. On one hand, he did keep things going right on through to the invention of bebop and the creation of the sound of all post-bop jazz.

Mr. Roach's most significant innovations came in the 1940s, when he and another jazz drummer, Kenny Clarke, devised a new concept of musical time. By playing the beat-by-beat pulse of standard 4/4 time on the "ride" cymbal instead of on the thudding bass drum, Roach and Clarke developed a flexible, flowing rhythmic pattern that allowed soloists to play freely. The new approach also left space for the drummer to insert dramatic accents on the snare drum, "crash" cymbal and other components of the trap set.

By matching his rhythmic attack with a tune's melody, Mr. Roach brought a newfound subtlety of expression to his instrument. He often shifted the dynamic emphasis from one part of his drum kit to another within a single phrase, creating a sense of tonal color and rhythmic surprise.

Virtually every jazz drummer plays in that manner today, but when Clarke and Mr. Roach introduced the new style in the 1940s, it was a revolutionary musical advance.

"When Max Roach's first records with Charlie Parker were released by Savoy in 1945," jazz historian Burt Korall wrote in the "Oxford Companion to Jazz," "drummers experienced awe and puzzlement and even fear."

One of those awed drummers, Stan Levey, summed up Mr. Roach's importance: "I came to realize that, because of him, drumming no longer was just time, it was music."

He played with everyone: Coleman Hawkins, Duke Ellington, Charlie Parker, Dizzy Gillespie, Thelonious Monk, Miles, Clifford Brown, Sonny Rollins, Bud Powell, Mingus, Kenny Dorham, Eric Dolphy, Cecil Taylor, Anthony Braxton, etc., etc. Everyone. He was not only a technically gifted and brilliant percussionist, he bent genres, created his own, paid attention to new strains in music (he was an early enthusiast of hip hop), and composed some of the most brilliant contemporary jazz around. It is challenging and often sublime.

Most people look to his bop work with Bird, Diz, Miles, et al., or his collaborations with Clifford Brown or his work with Kenny Dorham or with Sonny Rollins. Jazz history is like this - the creators of a movement (in this case the all-important bebop) become identified with that movement for all time. The rest of an oeuvre radiates from that center, the energy petering out at the edges until a musician can only muster something soft for the culturally moribund elites of the Kennedy Center, where the past matters more than the music of the present. Roach's star faded over time - it was tough to top the sensationalism of bebop - especially after the 1960s and free jazz, even if he had a gentle hand in its creation too. But not the quality and derring-do of his music. I think some of his most beautiful and deceptively complex work was done in the 1980s and 1990s. Much of it is overlooked precisely because of Roach's identification with past, and rightly legendary, moments in music history.

I recall, sometime in the early 1990s, driving through rolling hills of sunlit snow in a relatively remote part of eastern Colorado, and hearing something brilliant on the radio. It was a jazz program playing some new stuff, some old. I had already come to the conclusion years earlier that jazz had ended in a flourish with free-jazz, maybe a dab of fusion (which began and ended, in my view, with Bitches Brew). The rest was, even if technically accomplished and even lovely, a regurgitation of jazz history. Jazz had been about a constant pushing of the boundaries of music in constant conversation with one's fellows - collective transgression and creation (see here for a very small story on what I mean - the part on Steve Potts). I listened to Steve Lacy, Peter Brötzmann, and a couple others, but generally thought jazz was dead. Then there was a piece on the radio in that winter landscape that truly stunned me. It turned out to be a recent piece by Max Roach from 1991. Just a few years ago I came across a journal entry I had made later that day. It was one sentence written to myself in bold letters, as if an epiphanic answer to some torturous metaphysical conundrum, that read: "More Max Roach!"

What a giant loss for music today. 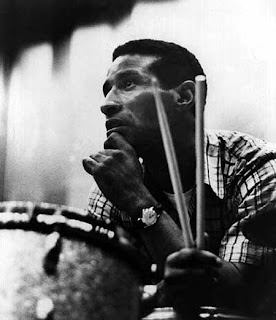 UPDATE:
A few music blogs have posted some downloadable Max Roach tunes where he plays mostly in the groups of other great musicians. The first two have posted some classic tracks of Max playing with Hawk, Bird, Diz, Miles, Brownie, and others...
Locust St.
Anablog
...and for the same spirit for which I loved Max - his own devastating creativity and modest brilliance - see Destination Out, which will be updating over the next day or two.

For a comprehensive discography, see the ever helpful Jazz Discography Project.

UPDATE:
The best collection of tributes and links out there is at Darcy James Argue's Secret Society.
Posted by helmut at 4:05 PM

Well, damn. His work with Clifford Brown was simply magnificent. Along with Art Blakey, Roach established the drums out there as an instrument. Rest in peace and thanks for all the work.

I saw him play with the Jeff Beck group in Frankfurt in the mid-seventies. Eclectic and always pushing at the edges.

Nice post. A little late to the wake, but I just downloaded Money Jungle and posted from it A Little Max (Parfait). Lots of Max's drumming with Duke Ellington on piano and Charles Mingus on bass.

Sorry, I thought Blogger linked my name to my blog. The song is at

Thanks, Mark, for the link. A site called "Gravybread" has a ton of mp3 blog links worth exploring for more Max Roach.