Problems with Vervets and Baboons 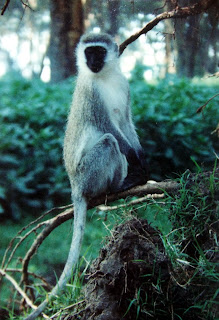 Lindsay linked (and see also Togolosh's comment) a couple of days ago to the story of vervet monkeys destroying crops and harassing women and children in Kenya. The women tried various strategies to ward off the vervets: dressing as men, for instance, since the vervets seemed to be afraid only of the men. The vervets, however, figured out the ruse, and mocked the women, pointing at their breasts.

I have also been harassed by vervets. The vervet in the photo above stole my bananas.

I was camping in a wooded area near Lake Nakuru, and preparing a small lunch. I had a bunch of bananas which would play no small role in my lunch, dinner, and breakfast. But I made the error of turning my back on my bananas for one brief moment. The vervet, apparently watching me from a hidden spot, made its move and snatched the bananas. I gave pursuit.

Smug though we may be in our comparative evolutionary status, a hungry man versus a vervet possesses no preordained outcome. An armed vervet military would be a mighty foe indeed. The vervet was quick and smart, I must grant him that. But he was also greedy. The bunch of bananas - about eight bananas - was too heavy for the vervet. He could therefore only drag them behind him, slowing him down considerably, and keeping him from the trees. My pursuit through woods and valleys was closing the gap. I was about to dive for the bananas - honest, actually dive for them - when the vervet cut his losses by plucking one banana from the bunch and scrambling up a tree. He chattered down at me sarcastically between bites of his purloined banana. I believe I shook my fist at him, as humans are known to do when provoked. 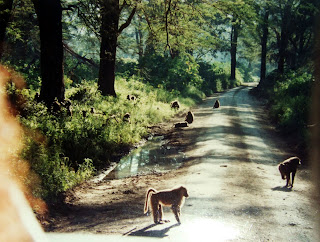 The same region, as nearly all of Kenya, also has a large population of baboons. The baboons in the above photo are preparing for ambush of the rickety van I rented with four other people. We had hired a Kikuyu driver who suggested we roll up the windows. The baboons attacked regardless of our fortifications, baboon arms reaching wildly through the remaining cracks in the windows for anything they could grab, teeth flashing at us. Nasty creatures, baboons.

Later, further south in Kenya and Tanzania, in the great Masai Mara, I had made camp with friends in the middle of the savanna, protected from the elements and wildlife only by tents and a campfire (this was no hotel trip - I'll tell you some other time about suffering from malaria in a Nairobi bordello room furnished with a cot, one bare light bulb, a sink, and a nail in the wall with a metal coathanger).

The pure night was full of the beautiful, eerie sounds of animal and insect life. My friends and I sat around the campfire surrounded by utter blackness and heard the rare growl of a cat, the occasional bark of a hyena, and sounds we couldn't describe. We had been told in Nairobi from the man who rented us our camping gear that we should only worry about how we sleep in the tents. The animals would generally stay away. "Do not sleep with your head near the entrance. Hyenas sometimes push their heads into the tent and eat the side of your face."

That night an elephant walked through our camp while most of us were asleep. Hyenas sniffed around my tent all night, provoking a toe-curling reaction on my part. And, finally, shallow sleep for a few hours.

I was first to awaken in the morning after the driver (he slept in the van), who had the campfire going again and some coffee already made. He and I sat around the fire for warmth and chatted about the sounds during the night, sharing a laugh about the elephant roaming through camp (which he had chased off with a stick and yelling), and planning the day's activities.

Then he suddenly said, "uh oh," looking past me. I turned around. A baboon was sitting in front of my tent. He was facing us, looking straight at me, nearly immobile. One of the baboon's hands, however, was reaching behind his back slowly and quietly unzipping the door to my tent.

I grabbed a stick from the fire and gave pursuit....
Posted by helmut at 3:39 PM

"these are not the bananas you're looking for..."

That vervet should have known that if you're gonna mess with Helmut, don't threaten his fruit. He takes that stuff pretty seriously...

Is pepper spray to rude? Works on our bears.

Sure baboons are bad, but try to think what they'd be like given a few million years and the right environment.

That's why they're funny and disturbing. They're mostly us.