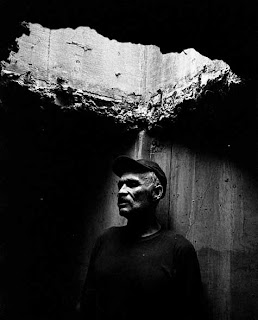 Exploring a wet drain under McCarran International Airport one night, I discovered a man named Lawrence sleeping on an elevated bed. The bed, which was about four and a half feet from the floor, was made of couch cushions, a steel frame and a door that provided additional support. Baling wire looped around the head and foot of the bed, angled tightly through the manhole, and wrapped around the rungs. Backpacks hung from the side on hooks.
I squatted and swept the beam of my flashlight under the bed. It was legless. No steel poles, no wooden beams, no milk crates – nothing. A square-shaped wire dangled from the side, serving as a stepladder. Except for his bikes, the whole camp was at least three feet above the stream of urban runoff.
Lawrence told me he designed the bed after reading about mountain climbers at a local library. "This is how they sleep when they stop and rest in the middle of a climb," he explained.

Yes, ingenious, although ingeniousness endogenous to a world within concentric social worlds that functions according to its own inner logic of self-reliance, a function of rejection of and by the immediate larger concentric social sphere. In this case, the larger context is the great geographical "simulacrum" (pardon the rather trite Baudrillardism; or potentially liberating Deleuzianism?) of our time, Las Vegas. Are such people - those in the forgotten worlds within a world - lost, as in marginalized beyond even the manageable margins of society? I honestly don't know.

When Thoreau famously wrote that the "mass of men lead lives of quiet desperation," he juxtaposed the life of Walden, the experience - such as it was - of wilderness, as a kind of dialectical method of contrasting the institutionally ingrained banality of much of social life. Thoreau was not, as commonly believed, arguing for an entirely individualistic wilderness philosophy. He was arguing for the importance of a life that could find the space to critique its own stultifying habits and liberate itself into new thoughts and ideas and experiences. The experience of "wilderness" was the creative and critical contrast with "society," but this was no incoherent rugged individualism, as he's often taught in schools. Thoreau knew well there was no escaping his social self. And he considered whether his trips to Walden were self-delusional in the end because Walden itself, its very conceptualization as wilderness, was to a large degree a social product. Culture and nature were inseparable. It would be ridiculous to call society in general bad. The question is what we can find in its necessary existence that is worth building and rebuilding and what most needs rejecting, and "wilderness" represented a critical position as much as a thing of aesthetic beauty.

But what of a world in which the experience of wild nature becomes more of a myth than ever? What spaces do we find to stimulate that dialectic between the unreflective and destructive elements of living in society and our ability to critically examine our place in it? Must we go literally underground?

p.s. Regular readers of Phronesisaical know that I've long had great respect for the work of blogger Geoff Manaugh, linking to his work on occasion and having the honor of being linked to in return on occasion. Geoff has recently moved to San Francisco from L.A. to take a senior editorial position at the very fine magazine, Dwell. My heartfelt congratulations to Geoff. Please pay his blog a visit and do check out Dwell.
Posted by helmut at 6:55 PM

Fascinating. You might be interested to know that there's a book about the society that thrives below Manhattan--- The Mole People by investigative journalist Jennifer Toth.

Damn I missed your great posts and no, I wasn't taken to a secret rendition site.Worse, I had to go to work (not funny in the least)

Walden shaped my thinking as much as any work and "wilderness" is both a construct and sublime.I live a half mile from a six million acre one and can't describe the effect it has on me. As for the adaptability of humans, it gives one hope...

Welcome back, Troutsky. I noticed what your work was this summer. If you have to work for The Man, and most of us do in some way, I can't think of a better way to do it.