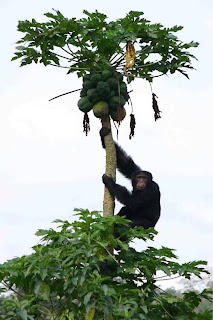 Male chimps apparently can win over the opposite sex with the aid of fruit stolen from nearby farms and orchards.

"The male chimpanzees appear to be showing off and trading their forbidden fruit for other currencies—that is, food for sex," said primatologist Kimberley Hockings at the University of Stirling in Scotland...

"We believe the males may be using crop raids as a way to advertise their prowess to other group members, especially the opposite sex," Hockings explained. "Daring behavior certainly seems to be an attractive trait, and possessing a sought-after food item, such as papaya, appears to draw even more positive attention from the females."