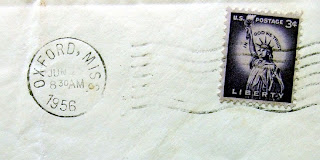 Years ago, I was browsing an antique store in the small Texas town of Bryan. I have an interest in rare books and first editions. Antique stores are sometimes good places to find them because their books are often priced for a general market based on the factor of being old, rather than priced for the specialized market of the rare books world. In the Texas antique store, I came across a first edition of Nobel laureate Faulkner's late novel A Fable. I bought it for a dollar or two and was pleased with the find - Faulkner is one of my favorite American writers.

After buying it along with some other books I noticed that the letter in it, which I had taken to be a simple bookmark, was postmarked from Oxford, Mississippi. June 25th, 1956. Faulkner was raised in Oxford and made it his home town until the end of his life (Faulkner's fictional Yoknapatawpha County).

I opened the envelope and read the letter (below). The letter itself, dated June 20th, is mostly rather banal. One Mrs. Owens (I don't know who she is/was) writes to Faulkner asking for the source of the quote, "...but that was in another country; and besides, the wench is dead." The quote itself is fairly famous, at least for its influence on other writers, and is worth examining in its own right for its embedded moral claim about moral boundaries.

The offense omitted from the letter by Mrs. Owens, however, the one taking place in "another country" and excused by the wench being dead, is fornication. The attribution of the quote has been haunting Mrs. Owens for three years, she says. Having found it used again in A Fable, she has screwed up the courage to write to Faulkner.

The next two paragraphs of the letter then apologize for writing him, and thank him for his work. Mrs. Owens ends with, "It's hard to be a good Christian and a good Southerner at the same time, isn't it?"

A mostly banal letter, but curious for its two questions. What does the last question mean? Is she referring to racism in the South? This seems obvious. She refers to Faulkner's essay in Harper's. This would be the piece, "On Fear: The South in Labor," published in the June 1956 issue, which deals with the Brown v. Board of Education ruling of 1954, and fear of segregation, including his own self-examined melancholy at the death of the Old South.

What of the "another country" quote? Mrs. Owens' interest allows for more salacious interpretations. Is she pining after a furtive, impossible love, imagining a justification for what remains a fantasy? Does she feel guilt for some actual sexual transgression? Is she a traveler who prefers to leave some memories abroad? Is she a budding ethicist concerned about the arbitrary national boundaries of justice?

For me, of course, an admirer of Faulkner's writing, the exciting part of the letter was the author of the answer to the source of the quote. In Faulkner's hand, a hand that touched this page over 50 years ago, he tersely responds to Mrs. Owens, "C. Marlowe's Jew of Malta. W.F." 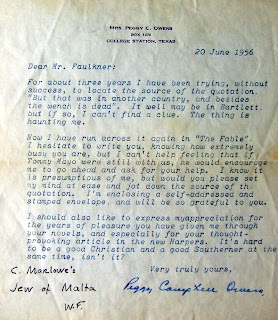 Thomas Franklin "Tommy" Mayo, who is referred to in the letter, was a faculty member at Texas A&M and a distant cousin of W.F. I wonder of C.M. Mayo has any relation to T.F. Mayo and W.F.?

What a find! Who have you shown it to in the "Faulkner industry," if anybody, or are you publishing your find just here and now?

No, never showed it to anyone in the industry - just friends over for dinner parties. Care to see my collection?

There are Mayos still in Oxford, including a Cal Mayo who practices law.

If you find yourself in Oxford, drop by the Downtown Grill and take a look at Faulkner's letter to the local paper, satirizing the local ordinances on alcohol.

(Also, a cavil - Oxford isn't parallel to Yoknapatawpha County - the fictional town is Jefferson, and the real county is Lafayette, pronounced "Lah-FAY-ette" by its denizens.)