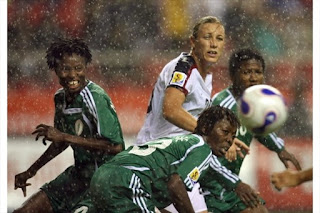 Photo: AFP
While you were doing whatever it is that you do, the Women's World Cup got going in Shanghai and has produced some exciting play. Two more days to go in the first round with some of the places already set for the quarterfinals and one upset exit from the tournament (Sweden). Buzz is that Brazil and North Korea have come of age; results have confirmed it. Germany has mostly dominated its first-round group. The US has looked a bit lackluster but have won their group (this year's "group of death") and have moved into the quarterfinals. The quarterfinals thus far include the US, Germany, North Korea, and England. Brazil should win its group, and I'd say that Norway, Denmark, and Australia will round it off. China has a shot, but they will have to absolutely clobber New Zealand tomorrow, if the match is played. Canada is also still a possible advancer.
But... just as it was all heating up, Typhoon Wipha headed straight at Shanghai. The city has apparently evacuated nearly 2 million people from the region. For more on the typhoon, see here.

Their cup runneth over.