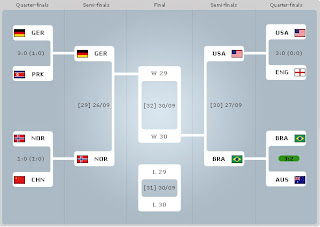 As usual, the Women's World Cup - held this year in China - receives a tiny fraction of the coverage of the men's World Cup. The former may not have the same level of excitement, but the matches have progressively gotten get better and better over the years.

Above is the bracket for the semifinals, decided earlier today and yesterday. The US and Germany won yesterday on big efforts by both teams. They look like the two teams for the final, especially after today's Brazil-Australia match. Brazil dominated Oz, and have looked great all tournament, but came away with only a 3-2 victory. Australia is no longer a pushover, but they're also not yet one of the elite teams. Norway squeaked by China, who otherwise dominated their match but couldn't put the ball in the back of the net.

I can't see Norway presenting much of a challenge for Germany. Norway's defense may keep Germany's goal-count low, but look for that match to be mastered entirely by the Germans.

Brazil-US will be the match to watch. Both teams have some of the more exciting strikers and ball-handlers in the game (perhaps the two most exciting players in Brazil's Marta and the US' Abby Wambach), and both teams are capable of terrific defense. The US, on the other hand, has the worst supporters' chant.
Posted by helmut at 10:33 AM