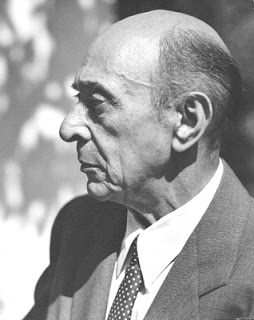 A nice little piece in the Times (via 3QD) on Arnold Schoenberg's twelve-tone system. The composition that eased me into the contemporary music camp as a youngster was Schoenberg's now overly romantic-seeming Verklärte Nacht of 1899, which is pre-12-tone, but a lovely introduction to the coming "emancipation of dissonance."

...if the application of the technique is loose, the aesthetic of 12-tone music — its deliberately disorienting sound world, its burst-open harmonic palette, its leaping lines and every-which-way counterpoint, its gleeful avoidance of tonal centers — is very much alive among exciting composers of otherwise strikingly different styles. Think of Judith Weir, Stephen Hartke, Kaija Saariaho, Steven Stucky and Thomas Adès...

Schoenberg revered order, form and tradition. So he took a conceptual leap. If all 12 pitches in the octave are to be used more or less equally, why not devise a system that ensured a kind of equality?

Instead of the old tonal hierarchy, or his short-lived experiment in harmonic free-for-all, Schoenberg specified that the 12 pitches be put in an order, or row. Once a pitch was sounded, it was not to be repeated until the entire row had unfolded. There were countless ways around this dictum, however, because Schoenberg adapted his technique so that the row could be transposed, gone through backward or upside down, broken into smaller units that were mixed and matched, and so on. Wiggle room was built in from the start.