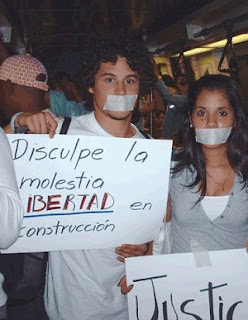 The National Security Higher Education Advisory Board, launched in 2005, consists of 20 university presidents around the country who are working with the FBI on matters of campus security and counter-terrorism to identify threats to students and staff. But the board is also being asked to guard against campus spies who might be out to steal not-yet-secret secrets. According to this report from NPR, the presidents are being advised to think like "Cold War-riors" and be mindful of professors and students who may not be on campus for purposes of learning but, instead, for spying, stealing research and recruiting people who are sympathetic to an anti-U.S. cause...

The NPR report doesn't say how universities would accomplish this without clamping down on their ordinarily open, information-sharing nature. Presumably, one possible way, not discussed in the NPR piece, would be to simply bar some foreign students and academics from entering the U.S. Another possible solution, used in the past, would be to bar U.S. academics from publishing or otherwise publicly presenting research that the government deems sensitive....

Yep. You forgot to mention that the whole "Libertad" campaign in Venezuela is mostly a concoction created by a publicity firm (ARS publicidad) for the benefit of the international media, which is very quick in criticizing and blaming the government in anything related to Venezuela. Freedom of expression is abundant in Venezuela, and those kids know it very well. That's exactly why they are protesting without any fear.

No, actually I didn't. I know these people personally. I also know people in the government and across Venezuelan society. I have no interest in the traditional opposition. They're ideologues. But I've seen the chavistas move from something promising to something I want nothing to do with.

I also know people from both sides, and frankly, I agree with you up to a certain point. Although there's a lot still promising in the rank and file of Chavismo, many at the helm are very sectarian and not interested at all in the benefit of anybody but themselves. But staging campaigns for "freedom of expression" in a country that has plenty of it seems ridiculous (I guess the capacity for self-delusion in human beings is close to infinite). Many of these kids are the children of those in the traditional opposition, yet they swear they stand for something else. Their movement follows the same pattern as all the color revolutions in the former Soviet republics, "revolutions" that were actually bankrolled by the U.S. government (as a matter of fact,it's undeniable that your government has been giving money to the Venezuelan opposition for years, so I don't blame the Chavistas for being angry about this).

What really irks me is that every campaign by the opposition against Chavismo has been marred by their own violence. Yet they insist they are being "repressed" by the government. To be fair, there's been violence coming from both sides (although barely any by the government security apparatus), yet the mainstream press insists in showing only one side of the conflict.

Tried to tell you Helmut. But good on you for having some hope. I'm heartened however by the populist ideology having a power outside this cult of personality. So perhaps all is not lost?