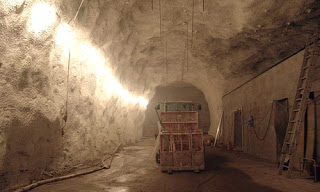 Photo: Mari Tefre for Getty Images, via the Guardian
A first photograph from near Longyearbyen, Svalbard. Go here at BLDGBLOG, which cites The Guardian:

Engineers last week finished work on one of the world's most ambitious conservation projects: a doomsday vault carved into a frozen mountainside in the archipelago of Svalbard, a few hundred miles from the North Pole. Over the next few weeks, the huge cavern – backed by the Norwegian government and the Gates Foundation – will be filled with more than a million types of seed and will be officially opened in February next year. "This will be the last refuge for the world's crops," said Cary Fowler, of the Rome-based Global Crop Diversity Trust, which is building the vault. "There are seed banks in various countries round the globe, but several have been destroyed or badly damaged in recent years. We need a place that is politically and environmentally safe if we are going to feed the planet as it gets hotter."