All Hail The Monks 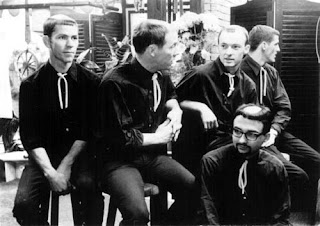 Photo: Gary Burger, 1966
I missed this. Dave Day of The Monks died a week ago. He was, as WFMU puts it, "The Man Who Will Always Own the Electric Banjo," adding that "a banjo will never be rhythmically abused so perfectly ever again."

The Monks were an influential band of proto-punk American GIs stationed in Germany in the 1960s. They were basically the epitome of that brilliant, loud amateurism that began blasting out of American garages in the 1960s, turned into 1970s punk, and still lives today in some of the far-reaching corners of the music scene. Try their first album, 1965's monumental Black Monk Time. The Morning News has one downloadable mp3.

"We were practicing and I had to take a leak," Burger said. "I laid the guitar against the amp and walked off the stage. I forgot to turn it off and the thing began to make this god-awful racket. It started off humming and then it increased in volume. Roger started hitting his drums and it sounded so right together."

Eddie Shaw went one step further when describing that initial bout with feedback. "Just imagine the sound of the Titanic scraping along an iceberg," he said. "It was like discovering fire."

Gary Burger quickly learned to control the feedback. Wielding a Gretsch Black Widow guitar, his lead lines were run through an audio atom-smasher that masqueraded as a Fender amplifier. A thick and distorted cacophony of black sound emerged. Burger trashed the speakers so often, however, that he had to switch to a heavy-duty Vox Super Beatle that had a custom-made 100 watt amp.

Around this time, the rhythm guitar was traded in for a six string banjo. The band wanted to sound as grating as possible and a banjo fit the bill quite nicely. Dave Day played this instrument, an oddity in rock n roll. To amplify the banjo, he stuck two microphones inside it. He chorded it like a guitar and the horse gut strings produced strange clacking sounds. Day’s frenzied attack is one of the most unique aspects of the group’s departure from conventional rock n roll music. The slashing banjo stays on the beat for the most part, but at times it introduces a counter-rhythm. The effect can be quite disconcerting.

I suppose this is one of those thing's you don't get from an all-volunteer army.