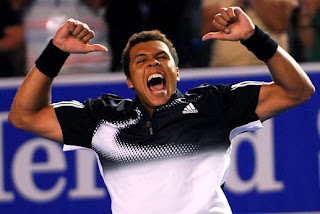 A nice story from the Australian Open. Frenchman Jo-Wilfried Tsonga, unseeded at the beginning of the tournament (ranked #38), a guy who's never been beyond the fourth round of a Grand Slam, is in the final against Roger Federer. Before we write him off against the mighty Federer, however, keep in mind that Tsonga beat #9 Andy Murray, the dangerous Guillermo Garcia-Lopez, #8 Richard Gasquet, #14 Mikhail Youzhny, and just routed world #2 Rafael Nadal last night to get to the final. He's a good kid and we have a new tennis star in front of us.

UPDATE: Oops. I was a little too quick to put Federer in the final. Sorry, Djokovic.
Posted by helmut at 3:32 PM