It's depressing to see John Edwards bow out of the race for the Democratic nomination. Just a couple of months ago, this presidential campaign season looked exciting. There were good candidates on the Democratic side speaking to serious issues. With the collection of fanatical yahoos on the Republican side, a Democratic president looked assured. Foreign commentators were equally relieved. Spiegel stumbled over itself in joy that American democracy did indeed still seem to work. After eight years of the Bush Administration, the worst and most comprehensively damaging presidency in the history of the United States, it seemed that we were awakening from our dogmatic slumber... or, rather, stupor. Even as we sit here twiddling thumbs, Judge Mukasey continues typically Bushian evasive maneuvers on a most basic of moral questions. And the policies of this president continue the slow slide towards catastrophic failure (see here for the latest on Afghanistan... or open pretty much any reputable newspaper). The Republican Party was fundamentally bankrupt. The Democratic Party through it all was conspicuous in its absence. Lies, deceit, secrecy, terror, authoritarianism, immorality, idiocy, greed, fanaticism,.... But finally - finally! - we were going to do something.

I might be mistaken, but I now sense dread creeping back into the picture. As of today at least, it appears that we'll have a McCain vs. Clinton race for the presidency. Flip a coin. It just doesn't matter all that much. As Dennis Perrin puts it,

...Two nearly identical choices for imperial manager, the one slight difference being that McCain says he's opposed to torture, while Hillary must wait to check wind velocity and direction. I can see the liberals twisting themselves into numerous knots trying to justify a Hillary vote over McCain, assuring each other that it's the right thing to do, and of course reaching back to Bill's criminal years for inspiration. You mules better hope that Saint Obama gets the nod instead. At least with him, the fantasy is easier to pull off. Change! Hope! Stardust! Ponies! If I ruled the world . . .

"Saint Obama," perhaps. As everyone complains, Obama is short on details and long on rhetoric (but what rhetoric!). Look, campaigns aren't about making particularly detailed policy proposals. Every campaign knows this. All that does is leave your candidacy open to attack by your opponents. Every genuine policy option in real life comes with its detractors. The only real option in a campaign is to walk a thin line between promising and hopeful rhetoric and just enough tread on proposals to give them political traction. In my view, Obama has run a smart campaign. He certainly has grassroots support. It's genuine. And, granting that the term "change" is meaningless (change can be positive or negative, backwards or forwards, after all), Obama nonetheless represents the only possible choice we have for a presidency of decency and intelligence with a chance at some needed progressive policies.

McCain is right on two things that I can think of: torture is wrong, and we need campaign finance reform. But, regarding the former, it's more a sign of the moral corruption of our current president and his party and ideologues that we have to say that torture is wrong. It's simply a sign of our current debasement, a predicament that this president has gotten us into. And campaign finance reform? No doubt. But this message also gives McCain good reason to be tight-lipped about the financing of his own presidential campaign. But McCain - regardless of what some of the shrieking pundits say - is fundamentally conservative. This is another matter of perspective - many on the right have driven the country past a reasonable conservatism, thus making McCain appear rather liberal by comparison. Yet, McCain is fundamentally for the Iraq War, which is at the very core of our current condition, suggesting even that it could last 100 years. War is the health of the state, after all. With a McCain presidency, we might have a relatively decent guy, but we'll also have an eternally conservative judicial branch, continuing a tradition of failure that President Bush has instigated with his atrocious choices of judges and his operation of the Justice Department.

McCain is establishment. So is Hillary Clinton. What does this mean? It means that a collection of ideas attached to particular fixed interests will be continued into the ground when they have actually already run their course and desperately need reconstruction. These ideas extend from war to economy, education to business, crime to disease. On these issues there's really very little difference between Clinton and McCain.

So, what? In the general election, McCain will defeat Clinton. In the general election, Obama can defeat McCain. We've seen that the Democrats are fully capable of shooting themselves in the head. Much as I'd also like to see a woman as president, you'd have to be an idiot now to be a Democratic supporter of Clinton over Obama. The bright spot is that the gap between Clinton and Obama in national polls is slowly closing. The dread is that we'll end up with McCain vs. Clinton. What the latter scenario would do to our political hope is unthinkable.
...

And yes, I've thought about this:

As Whiskey Fire puts it so pithily:

Anyway, the reason McCain is the GOP nominee is that they have no one else.

And the reason they have no one else? Because they got nothing.

The GOP is running on fumes, and not in their usual sense, where they're huffing straight from the propane tank.

In a followup post, Whiskey Fire notes the recent uptick in violence in Iraq and what it may auger for the candidacy of the lesser of several evils:

St. John McCain has made his enthusiasm for The Surge the centerpiece of his argument about why he should be Grand Moff CIC. This strikes me as risky -- it's putting all his eggs in one basket, and it's not even his basket. The people holding it are the Iraqis, and if they want to ramp up their civil war, they will, and all the preznit's horses and all the preznit's men won't be able to keep them from blowing the shit out of each other. Then McCain will have egg on his face. Also there will be many, many dead people.

Also Teh Surge! ends in the summer. Right before the September-November campaign season gets going. A hell of a time to be running on War Forever, as McCain is doing.

So he's in trouble. Of course the GOP candidate was always going to be a total fucknozzle, anyhow.

I still think McCain is the one fucknozzle who beats Hillary in the general election. Clinton's own record on the war is simply too murky.
...
There's also this crucial element - the youth vote and who gets them going (via Peter Levine): 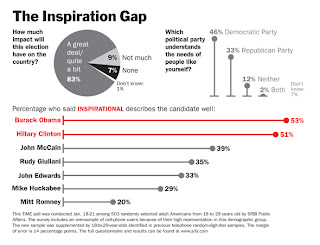 Isn't Obama going to have to say he didn't inhale crack or something? Still, I agree with your analysis and conclusions. I think Edwards is out now because he's going for VP and now was the optimally graceful moment--he scored lots of podium and limelight time and outlasted the other also-rans, but he hasn't had to go bare-knuckles against anybody he'd like to welcome him as a running mate.

Yeah, Edwards has been very careful not to commit. He's pretty clearly shooting for VP. Or somethin'.