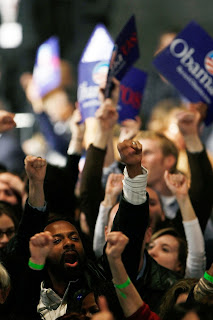 This citizen-blogger has made up his mind. (photo snagged from Sullivan).
Posted by helmut at 10:45 PM

OVER the years, I’ve been deeply moved by the people who’ve told me they wished they could feel inspired and hopeful about America the way people did when my father was president. This sense is even more profound today. That is why I am supporting a presidential candidate in the Democratic primaries, Barack Obama.

My reasons are patriotic, political and personal, and the three are intertwined. All my life, people have told me that my father changed their lives, that they got involved in public service or politics because he asked them to. And the generation he inspired has passed that spirit on to its children. I meet young people who were born long after John F. Kennedy was president, yet who ask me how to live out his ideals.

Sometimes it takes a while to recognize that someone has a special ability to get us to believe in ourselves, to tie that belief to our highest ideals and imagine that together we can do great things. In those rare moments, when such a person comes along, we need to put aside our plans and reach for what we know is possible.

We have that kind of opportunity with Senator Obama. It isn’t that the other candidates are not experienced or knowledgeable. But this year, that may not be enough. We need a change in the leadership of this country — just as we did in 1960.

Most of us would prefer to base our voting decision on policy differences. However, the candidates’ goals are similar. They have all laid out detailed plans on everything from strengthening our middle class to investing in early childhood education. So qualities of leadership, character and judgment play a larger role than usual.

Senator Obama has demonstrated these qualities throughout his more than two decades of public service, not just in the United States Senate but in Illinois, where he helped turn around struggling communities, taught constitutional law and was an elected state official for eight years.

And Senator Obama is showing the same qualities today. He has built a movement that is changing the face of politics in this country, and he has demonstrated a special gift for inspiring young people — known for a willingness to volunteer, but an aversion to politics — to become engaged in the political process.

I have spent the past five years working in the New York City public schools and have three teenage children of my own. There is a generation coming of age that is hopeful, hard-working, innovative and imaginative. But too many of them are also hopeless, defeated and disengaged. As parents, we have a responsibility to help our children to believe in themselves and in their power to shape their future.

Senator Obama is inspiring my children, my parents’ grandchildren, with that sense of possibility.

Senator Obama is running a dignified and honest campaign. He has spoken eloquently about the role of faith in his life, and opened a window into his character in two compelling books. And when it comes to judgment, Barack Obama made the right call on the most important issue of our time by opposing the war in Iraq from the beginning.

I want a president who understands that his responsibility is to articulate a vision and encourage others to achieve it; who holds himself, and those around him, to the highest ethical standards; who appeals to the hopes of those who still believe in the American Dream, and those around the world who still believe in the American ideal; and who can lift our spirits, and make us believe again that our country needs every one of us to get involved.

I have never had a president who inspired me the way people tell me that my father inspired them. But for the first time, I believe I have found the man who could be that president — not just for me, but for a new generation of Americans.