The Din of Cairo 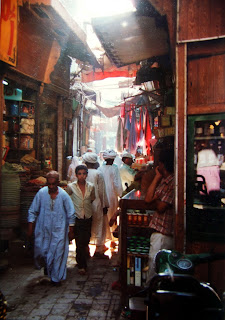 Spice and Scent Market, Cairo. Photo: Helmut (in the reflection)

This article was in the NY Times a few days ago, and I've been reminded of it by Geoff Manaugh at BLDGBLOG.

This is not like London or New York, or even Tehran, another car-clogged Middle Eastern capital. It is literally like living day in and day out with a lawn mower running next to your head, according to scientists with the National Research Center. They spent five years studying noise levels across the city and concluded in a report issued this year that the average noise from 7 a.m. to 10 p.m. is 85 decibels, a bit louder than a freight train 15 feet away, said Mustafa el Sayyid, an engineer who helped carry out the study.

But that 85 decibels, while “clearly unacceptable,” is only the average across the day and across the city. At other locations, it is far worse, he said. In Tahrir Square, or Ramsis Square, or the road leading to the pyramids, the noise often reaches 95 decibels, he said, which is only slightly quieter than standing next to a jackhammer.

I can only concur with the study. Having lived there a lot over the last few years, I'm only too aware that there is little respite from the incessant din. Try living next to a mosque - the 'unassisted human voice' allegedly prescribed in the Qu'ran somewhat circumvented by the use of harsh and cacophonous loudspeakers. It's OK though: they don't usually fire up until at least 4am ...

There is no amp is greater than God's amp.

Yeah, the early call to prayer takes some serious getting used to for non-Muslim ears.

As a tourist and having no particular sleep schedule to keep to, I've liked the primal sense of place and society that the muezzin call creates--and I think that romantic, culturally relativistic response is typical. It's when you're used to it that it really bothers you, I suspect. In Europe I've sometimes found the church carillon oppressive. Those bells are loud! Thank goodness for the breeze or in every religious country we'd be suffocating on incense as well. Don't get me started on those Tibetans.