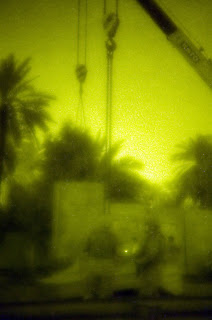 A great little essay by Bryan Finoki at Subtopia on the business of blast walls in Iraq and elsewhere.

...suppose the occupation ends one day, how long will those walls really remain in place, what forlorn legacy is being cemented in the streets of Baghdad today for generations to come? If they were removed at some point, I wonder what would happen to all that concrete? Would it get formally recycled, or broken down into lucrative scrapper markets underground? In such a market, I wonder how much concrete it would take to sustain the life of an average refugee family in Iraq for a month. Who would even own the blast walls if the occupation were to suddenly cease? Would the Americans leave but then come back to reclaim their heaping piles of blast walls one day? Or, could we imagine in a bizarre post-colonial kind of way some newly adaptive reuse project for all these oppressive slabs, say, Bremer Wall refugee rehousing projects? Or is that just too symbolically grim to even consider? How about future bridges and infrastructure made out of old blast walls? Think of all the Iraqi reconstruction projects that aren't getting the attention they deserve compared to the constant fabrication of these barriers.

See also this NY Times article on the US-Mexico border wall. It seems that, in the name of the border wall, 30-some federal laws have been suspended. Border wall law trumps other laws, and Homeland Security is the supreme authoritarian decision-maker.
Posted by helmut at 11:32 AM