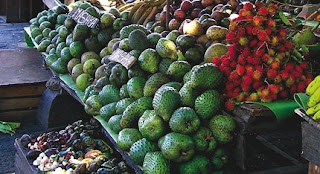 Finally, an appreciation of the political-economic significance of tropical fruit.

A host of indigenous fruits in ACP countries have potential as food and cash crops. Though familiar to local communities, many of them are little known outside their region and are frequently overlooked by researchers, policymakers and development organisations. In Africa alone, where most edible native fruits are wild, one assessment lists more than 1,000 different species from 85 botanical families. Some of the fruit-bearing plants are carefully tended, but few have been selected to bring out their best qualities.

Native fruits can play a crucial role in combating food insecurity, especially the so-called hidden hunger caused by micronutrient vitamin and mineral deficiencies. In the Pacific, the Island Food Community of Pohnpei encourages mothers of vitamin A-deficient children to feed them local fruits high in carotenoids, including Karat and Daiwang bananas. Health benefits aside, indigenous fruits have a number of other advantages. They require little or no capital outlay or external input, are perfectly adapted to local conditions, and often have medicinal properties. From Senegal to South Africa, the grey-green fruits of the Kigelia (Kigelia africana) have a long history of consumption and topical application and are now being investigated for development in the natural skincare sector. Tests confirm the fruit has significant anti-inflammatory properties.

Such natural treasures also serve as effective risk buffers against climate change. "It is extremely important to come back to some of the so-called forgotten and underutilised plants, because many of them can withstand droughts or floods much better than commercial crops", said International Centre for Underutilised Crops (ICUC) Director Dr Hannah Jaenicke. In Zambia, the Tonga people of the Gwembe Valley have revived the practice of gathering wild fruits to cushion them against food insecurity caused by persistent drought.