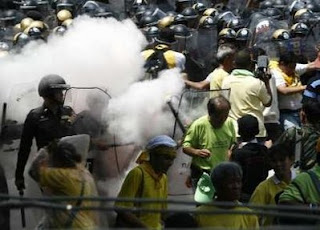 The semester begins this week. I still have three syllabi for three different grad seminars to do, work on a symposium in November on the torture book, various bits of email catch-up, a little political project, another small-ish grant project, and meetings. Blogging seems so far away when work piles up. Two sets of links for today:

Via a student, here are a couple links to discussions of a new study of poverty by the World Bank and Asian Development Bank, respectively. The WB version says the world is poorer than thought as of February 2008: 1.4 billion people in poverty.

***
And Thailand is adjusting again, in case you've missed it.

Thailand's political scene descended into chaos on Tuesday morning when supposed pro-democracy protesters stormed a television station, took over government buildings and blocked roads in an attempt to force the downfall of a democratically elected government. Samak Sundaravej, a generally unpopular prime minister, has stood firm but resisted using heavy-handed measures that could easily see the return of a military-led government.

Oddly enough, a violent response may be exactly what the protesters, led by members of the People's Alliance for Democracy (PAD) want. PAD leaders have called the protests "the final showdown" and machetes, sling shots, golf clubs and possibly at least one gun were seized from protesters in an abortive early raid on a television station on Monday night. The PAD's moves on Tuesday followed all the usual steps of a coup: seizing a media outlet; blocking main roads into the capital; and taking over key ministries and the seat of government. Samak has accused the protesters of trying to incite a coup and wanting "bloodshed" in the country.

See also this Thai photo blog (photo above from there).
Posted by helmut at 10:40 AM