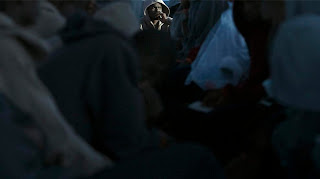 Cheryl Rofer at Whirled View has an outstanding piece on NATO supply routes into Afghanistan. It's most fascinating for the overlapping, shifting politics of pretty much every country in the region. A definite must-read.

More conservative self-castigation, this time by Reid Buckley in AmCon Mag (via Wolcott). A little bit more self-reflection might allow Reid to not stereotype and trivialize environmentalism coming from the left (or wherever else lumped into "The Left" because it's apparently not conservative). He's on the right path, but he still doesn't get the reality-based community.

The Editors hand out the Golden Winger awards with guest-hosts GW Bush and Harry Reid.

The NY Review of Books (via Changing Society) publishes a translation of China's Charter 08, signed by 2000+ Chinese, which lays out the basic principles of legal and political reform in the country.

A fine piece from a couple of weeks ago by Tony Karon on Israel's Operation Cast Lead in Gaza. Like Juan Cole's Informed Comment, Karon's Rootless Cosmopolitan has become essential reading on the Middle East, particularly Israel/Palestine.

A final shout-out to France from Bush. SuperFrenchie explains: "With only hours to go (finally!), and 6 years after it reached the height of international stupidity with the freedom fries name change, the Bush administration has decided to get into one more food fight by imposing a 300% tariff on… Roquefort!"

The Wege returns. And - I'm late on this - so does Michael Berubé. Welcome back, both.

And, finally, an interesting photo essay at the Big Picture on African immigration to Europe (photo above from there).
Posted by helmut at 8:38 PM