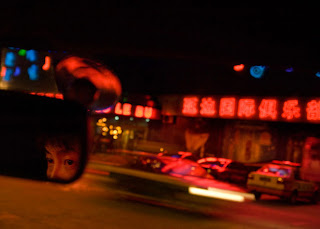 Photograph by Chien-Chi Chang
Bryan Finoki links to a National Geographic piece on the "Asian underground railroad" between North Korea and Thailand...

...[an] Asian underground railroad that refugees from North Korea continue to use at great risk to reach Thailand, where they have the best chance of finding a new livelihood since, unlike many of the region's nations, Thailand does not practice a policy of returning North Korean "illegal immigrants" back to their homeland. Back in the nineties when North Korea was plagued by famine the migration route mostly passed though Southern China, but the Chinese have since increased border controls there, which have relocated paths through Mongolia. However, it wasn't long before the Mongolians established their own security barriers and pushed migrants further out into the hard traveled Gobi desert. Eventually, the exodus geographies began to extend into Mynammar, but the dangerous militarized zones there have highly discouraged this option from becoming too well tread. After getting through China, Vietnam used to be an option, but in 2004 the government dramatically clamped down on the informal border crossings there and send refugees back to Korea. Today, the most commonly used escape route has been diverted through South Korea, China, over the mountain ranges of Loas, and then into Thailand.