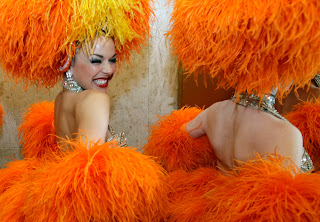 French cabaret dancers from the Moulin Rouge pose during a photo call in Rio de Janeiro February 20, 2009. The dancers are in Rio de Janeiro from 20-24 February to participate in the carnival festivities by the top samba groups. (REUTERS/Sergio Moraes)

I know it's kind of late, but fêting the fête of carnaval can never be fêted enough. The music, especially... it always goes on, accumulates, and, unlike most of northern pop, always remains an important part of human heritage because it generally shoots for the soul rather than the market.

I suggest checking out the downloads at Eu Ovo and their rich summary of the year 2008 in Brazilian music. From there, you might go to Brazilian Nuggets and Som Barato. And SacundinBenBlog for classics of Tropicália.

Plus, some more stunning photos courtesy of The Big Picture... 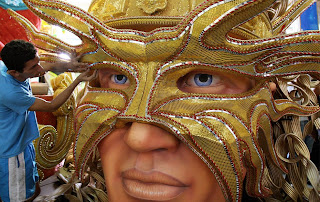 A member of Academicos do Grande Rio samba school work on a float in Samba City in Rio de Janeiro, Brazil on February 18, 2009. (VANDERLEI ALMEIDA/AFP/Getty Images) 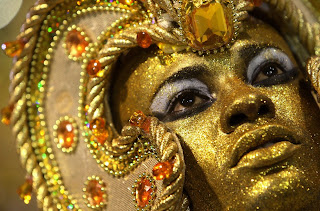 A member of Unidos do Peruche samba school parades at the Sambadrome, as part of carnival celebrations, in Sao Paulo, Brazil, late February 20, 2009. (MAURICIO LIMA/AFP/Getty Images)
And this incredible photo of the Tenerife Carnival Queen from the Canary Islands... 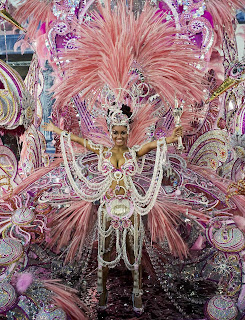 Ana Maria Tavarez reacts after being crowned the Tenerife Carnival Queen 2009 during a carnival gala in Santa Cruz de Tenerife on the Spanish Canary Island of Tenerife, late February 18, 2009. (REUTERS/Santiago Ferrero)
Posted by helmut at 3:31 PM