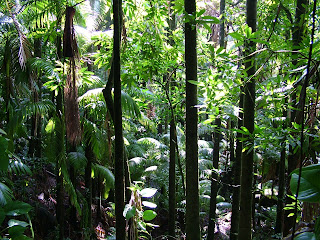 The Guardian reports on an old theme: first, that biodiverse rainforests contain vast potential for the base formulas of new medicines and biotechnologies (there may be a cure for cancer in there); and, second, that bioprospecting for this basic genetic material is a way of changing the economy of the forest from malignant practices like logging to the conservationist approach of preserving forest biodiversity as a resource in itself.

The first part of that theme is indeed true - rainforests and other biodiverse areas are potentially rich sources of new medical and biotech resources. And, indeed, this is one argument that's often advanced by conservationists; the argument that rainforests are of great instrumental value to humans beyond the value of their timber, and the source of that value should therefore be conserved. This is one of many arguments thta one can advance in the name of protecting rainforests from malignant economic practices like logging or clearage for agriculture.

The second part of the basic theme - about bioprospecting as an economically viable conservation tool - is much more complicated. Another post from 2006 explains,

...Some firms maintain that natural products discovery through genetic prospecting remains an important form of research into the indefinite future. Others at the forefront of the industry, however, suggest that genetic prospecting or natural products research is much less important than previously thought (Service 1999). Virtually all drug development proceeds by “rational drug design,” involving computer visualizations, laboratory production, and high-throughput screening. Genomics and combinatorial chemistry have radically altered the drug research landscape. Instead of designing drugs through testing and altering natural chemical samples from organisms, drugs can be developed from an understanding of how genes and proteins behave. Some researchers have contended for some time that combinatorial chemistry could render genetic prospecting redundant (see interviews in Macilwain 1998; Service 1999). Some university-based drug development chemists contend that such technologies render prospecting for samples from natural products at least less significant; at best, promotion of these technologies and methodologies is cyclical, built largely around cost-effectiveness, institutional inertia, and the potential value of natural products research versus the shorter time horizon of developing drugs through rational drug design (private interviews, 2005; see also Olsen, Swanson and Luxmoore 1997). Olsen, Swanson and Luxmoore maintain that “perceptions of the difficulties associated with [natural products research] appeared to lag behind technological advances which would significantly reduce those difficulties” (1997). One wonders, however, why perceptions do not seem to have changed much over more than a decade. Others suggest that the best approach is a balanced combination of rational drug design, combinatorial chemistry, and natural products research (Lahana 1999). Finally, even if genetic prospecting does remain an important element in drug development, research on extremophiles (organisms inhabiting severe environments such as marine thermal vents) and microbes in environments such as toxic waste dumps indicates that there is no guarantee that genetic prospecting and its benefits are ineluctably tied to biodiverse areas.

Biodiversity's marginal value may indeed be negligible, while new drug development technologies indicate decreasing industrial dependence on genetic prospecting. If so, and if drug development firms are increasingly turning to rational drug design and other methods of drug development, then the basic premise of the United Nations Convention on Biological Diversity (CBD) - that conserving biodiversity is a function of developing genetic resources for pharmaceutical and biotechnological application - rests on tenuous grounds, not to mention the entire discourse on bioprospecting as a sustainability mechanism. If there are few future monetary benefits from biodiversity, if indeed its marginal value is close to zero, then expressed conservation objectives could further succumb to short-term, economically beneficial but environmentally destructive agricultural and timber harvesting practices....

I can be instrumentalist without requiring immediate delivery, can't I? Nobody could read the Rosetta Stone when it was discovered, but it was a sage opinion to protect it and use some other material for the King's new kitchen. We don't know how to decipher habitats or ecology or even how DNA is turned into a whole organism. Meanwhile, tropical habitats contain nearly all the ways that life is sustainable. They are the inventory and the assets of over a billion years of natural selection. We don't know yet how to run the company, but so fucking what? We'll learn.

But that's not the issue I'm raising here. Sure, we can conserve something in the hope or expectation that it will be of later instrumental value. That would be an intelligent thing to do if the possibility has a fairly high level of probability. But that's not the only reason to conserve biodiversity either.

My point is that bioprospecting has been proposed as a conservation tool for about two decades now, but the few paradigm cases of grand discoveries - yew trees (taxol) and rosy periwinkles (vincristine) - all date from much further back. It's not that such discoveries aren't potentially there into the indefinite future. It's that bioprospecting isn't economically viable. It's analogous to oil. "Scarcity" re oil, as economists use the term, doesn't mean there's no oil left; it means that the oil that may remain in the earth isn't economically efficient to extract.

The problem with bioprospecting as a conservation tool is that it's not economically efficient. The ratio of time/effort/funding to discovery/product just isn't promising enough for anyone to invest. One firm that tried, Shaman Pharmaceuticals, went bankrupt. An agreement between Merck and Costa Rica's INBio reaped little for Merck's investment. Yet, the myth that there is great wealth to be reaped from biodiversity continues to be propagated (at times, insidiously) and some local forest communities pin the hopes of sustainable economic development on that myth. At some point everyone will figure out that the money ain't coming. Then what happens?

Don't get me wrong - I personally want to conserve rainforests and other biodiverse areas as, if nothing else, the common heritage of humankind, regardless of instrumental value and even if costly. I want them simply to continue to exist and exist in robust, stable, and healthy states.

But it's better to find other, more robust ways to conserve and leave the possibility of medical discoveries from biodiversity as a happy potential side-effect of conservation.

I believe you are talking about capitalisms basic insufficiency. An extremely consistent theme lately and one about which there is much "beating around the bush", pun intended.

I guess you could argue that without things and places to despoil, there'd be no externalizing costs.

Why not loot? Why not steal? The choice not to is a vote of confidence in the system and its conventions as we know it. In principle conservationists could work to give people confidence, to change their perception of who and how many are complying with conventions or how easily ("see Jimbo, most are tossing their beer cans in that bin there, not leaving them on the beach") , and/or enlarge their view of the system of they of which they are a part. The last reason is part of what motivates the culture war. Certainly does for me. How will people appreciate the value of natural habitats and biodiversity if we don't teach and preach common descent and science?