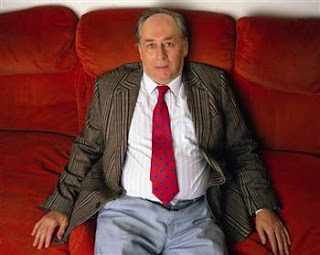 Photo: David Levenson/Getty Images
J.G. Ballard has died. The UK's Borges (not Borges Lite, but Borges Dark) inspired a cult following and, eventually, a path winding through much of contemporary pop culture. My introduction to Ballard came in the 1980s and his 1973 novel, Crash. This book examined with typically dark wit the old question of where human being ends and machine begins (raised in, for example, Shelley's Frankenstein and later in Shinya Tsukamoto's 1989 underground film, Tetsuo Ironman). But Ballard did so through the protagonists' sexual fetish for car crashes and the climax of intertwining flesh and steel.

Ballard was probably most widely known for Empire of the Sun, his semi-autobiographical account of life in a Japanese internment camp in China during WWII, but I have a particular fondness for Ballard's short stories and for the somewhat overlooked ecological fantasy, The Day of Creation (1987). If you haven't read him, I suggest any collection of his short stories (I started with Low-Flying Aircraft and Other Stories) before moving into his fantastic novels. Or you might go to his experimental study of media politicians, The Atrocity Exhibition, and its chapter essay, "Why I Want to Fuck Ronald Reagan."

With Ballard's death comes another great loss.
Posted by helmut at 2:45 PM

A unique writer who will be missed.

Agreed. He was my all-time favorite writer. My two favorite books of his are Crash and Super-Cannes.