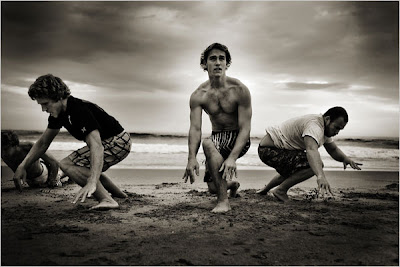 I was kind of an off-and-on surfer dude as a youngster in southern California, following an older cousin who made surfboards (including my own) and was sunk deeply into the surf culture of the 1960s-1970s. His sister was big on the Beach Boys and late summer afternoons hanging at the beach with friends. I was growing up in different places in Asia, but my hometown of San Diego was always home base for a year or two in between a few years here and a few years there in different countries. My cousins were the closest family apart from my immediate family and they were the direct conduit back into American culture. So I learned to surf with my cousin, riding on one of his handmade boards, and going to spots that are now legendary names - Black's Beach and Windansea in La Jolla, OB, up north to what was then a relatively uncrowded Trestle's, and our favorite Swami's. There's a certain feeling to that - the refracted sun slowly burning through San Diego's typical morning fog and chill; the excitement of waking up to a Santa Ana wind; the scent of coconut from Mr. Zogg's sex wax mingled with an occasional whiff of marijuana in the air; sometimes dolphins playing in the waves; fish tacos for our happily tired lunch; War, Led Zeppelin, and Bob Marley....

For the longest time, the general culture of surfing viewed anything Atlantic as cute little sibling to the bigtime Pacific waves. The Pacific Ocean was large, deep and mysterious, full of dark forces that pushed seismic signals across thousands of miles to rise up into monsters on the sandbars and reefs of California, Mexico, Hawaii, Australia, New Zealand, Fiji. This immense energy ended its ocean voyage often with a human being atop it. This sense of power and vastness as the backdrop to one's activity infused surf culture, even on small days in southern California. The Indian Ocean and the perfect waves it brought to Indonesia were also far more serious than anything produced by the Atlantic Ocean. American surfers from the west coast sighed or chuckled at the homely sight of North Carolina or New Jersey beach breaks. North Carolina had a bit of a name, and it certainly had its local surfers, but the breaks were usually a mess and constantly shifted location along with the sands below. Plus, the waves came out of the ocean that belonged to Old Europe. Quaint, but not the frontier Pacific, which held out the ever-present possibility of finding some "new," remote, unsurfed spot - the "secret spot." As I recall from then, places like France and Spain - well-surfed today on beautiful and strong waves - simply weren't on the surfing map yet. Surfing was centered on the powerful Pacific Ocean with Hawaii its mecca.

This is all a long-winded and nostalgic way of directing you to Chris Bickford's photo essay in the NY Times on North Carolina's surf. NC may still be the jokey younger sibling for most west coast and Hawaiian surfers, but it's a serious place for surf with its own unique sense of this beautiful relationship between the physical power of nature and human beings. 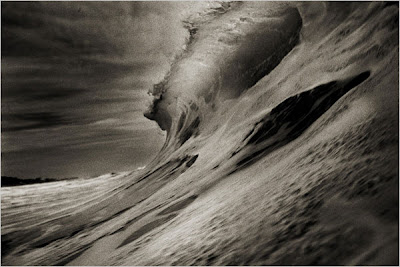 While I'm at it, let me toss in a photo of a wave I've found absolutely terrifying since its "discovery" in the late 80s. It's certainly not the largest in the world, and larger waves at places like Maverick's in northern California or Waimea Bay and Jaws in Hawaii also break on reefs, but imagine your board racing near-uncontrollably ahead of this uniquely thick mass of water, the reef speeding past just a couple of feet beneath the surfboard. This is the deadly wall of water that is Teahupo'o in Tahiti: 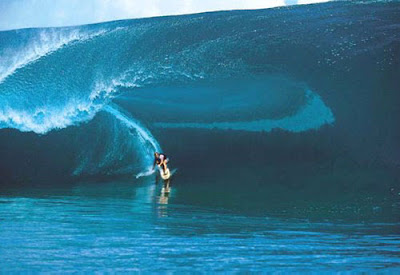 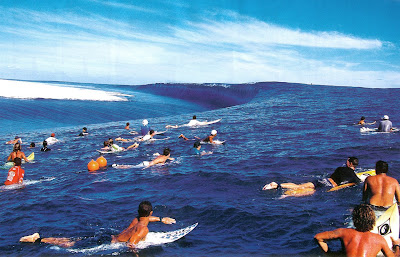 Teahupo'o may very well be the last discovery, the closing of the surfing frontier.
Posted by helmut at 3:31 PM